Annual growth in Sydney house prices the strongest in 14 years

WE ALL know housing affordability in Sydney is bad. But it may be worse than we think. House price growth in the New South Wales capital has ramped up, big time.

That’s right, just when we thought house prices couldn’t possibly keep growing at the pace they have, CoreLogic’s latest Home Value Index has shown they have blown out of the water.

House prices in Sydney are up an unbelievable 18.4 per cent on a year ago. This is the highest annual growth rate in 14 years — since the 12 months ending December 2002 when the housing boom of the early 2000s started to slow.

Over the past five years, Sydney house prices have surged 75 per cent.

“The strong growth conditions across Sydney have provided a substantial wealth boost for homeowners, however, the flip side is that housing costs are becoming increasingly out of reach. This is especially true for price-sensitive segments of the market such as first time buyers and low income families,” CoreLogic’s head of research Tim Lawless said of the results.

In any case, Sydney’s housing market is severely unaffordable and it doesn’t seem to be simmering.

THIS IS WHY YOU CAN’T AFFORD A HOME

One word: investors. According to Mr Lawless, rampant demand from property investors scrambling to reap the capital gains in the Sydney market is behind surging prices.

“It clearly is not about the yield because yields are at record lows in Sydney. Investors are willing to sacrifice the cashflow on their property and are buying to secure future capital gains it would seem,” he told news.com.au.

“Other investment classes at the moment really aren’t that appealing. Cash and bonds, even though they are very safe, aren’t offering up much return because interest rates are so low. Housing has provided a very strong return with capital gains in markets like Sydney and Melbourne.”

According to the latest housing finance data from the Australian Bureau of Statistics (ABS), investors make up more than half (57 per cent) of all new mortgage demand in NSW. This is substantially higher than the long run average, which is slightly above one third.

“There are a lot of investors who are saying it is a perfect time to go into the market — house prices are going up and interest rates are very low. And because a lot of them have got equity in their existing properties they can just leverage up and go and get another property.”

Investors want in in Sydney and they want in now. 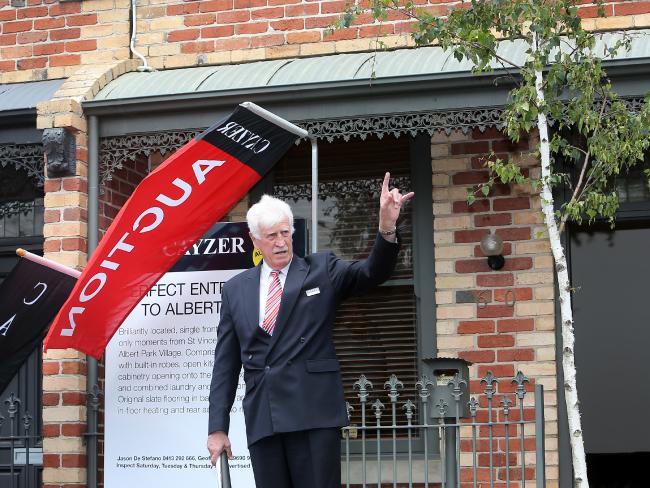 House prices in Sydney recorded the highest annual growth rate in 14 years in the year to February.
Source:News Corp Australia

WHAT CAN BE DONE?

At the end of 2014, when faced with a huge amount of investor demand, the banking regulator, the Australian Prudential Regulation Authority (APRA) placed a cap on how many investor loans banks could settle. The cap enforced a 10 per cent annual growth limit on investor mortgages.

So to curb these loans, banks increased interest rates for investors and made them front up a bigger deposit.

The cap still exists but according to Mr North, limiting mortgages to investors hasn’t worked and won’t work as a sole strategy — even if APRA reduced the limit to 5 per cent.

“I think there has been a failure of policy. If I stand back and think about this more holistically I think interest rates are too low. I think the strategy of allowing the housing sector to try and leverage the economy has failed, and essentially, what we have now created is a housing sector that is massively overvalued.

“I believe we have a major question as to whether what has been done is the right stuff. I think we should stand back and question where to from here? I don’t think just keeping a growth limit and do nothing more is a strategy which is going to work.”

He said the problem needs to be tackled from the demand side — actually reducing the number of people wanting to invest in the property market.

“If you want to tackle this seriously, you can’t just leave it to the Reserve Bank and APRA, you’ve got to be addressing the tax breaks such as negative gearing and those sorts of things,” Mr North told news.com.au.

“You cannot solve this with the supply side by releasing more land or by limiting loan growth. That is not going to be sufficient to move the dials. We have to be recognising that these tax breaks are part of the problem.”

But Mr Lawless, on the other hand, is more optimistic. He believes the property market is likely to moderate this year without the need for any major intervention.

“I remain of the view that housing market conditions will moderate during 2017 due to affordability constraints impacting on housing demand, as well as higher supply levels and an eventual slowing of investment demand brought about either through changed policies from Australian lenders or via regulatory changes aimed at slowing credit growth across the investment sector,” he said.

House prices across the combined capital cities increased by 11.7 per cent over the twelve months to February. This is the strongest annual growth since June 2010.

This article was originally published by Julia Corderoy on the 2nd March 2017 via news.com.au