According to preliminary data released by CoreLogic on Monday, a national capital city auction clearance rate of 78% was achieved last week, up from the final reading of 74.4% of the previous corresponding week.

It was also well above the 60.1% level achieved in the same week a year earlier.

Underlining the strength of the result, it came despite a noticeable lift in the number of properties that went under the hammer last week.

CoreLogic said that 3,367 properties were taken to auction, the second highest number seen this year.

However, partially contributing to continued strength in clearance rates, that figure was still well below the level seen in the same corresponding week a year earlier.

“Despite the surge in auction numbers, market volume is still significantly lower than the corresponding week last year (3,729),” said CoreLogic.

“Every capital city except Perth and Canberra are showing auction numbers to be lower than a year ago, while every capital has recorded a higher clearance rate compared with last year.”

Keeping with recent form, the strength in the national figure was driven by yet another strong performance from Australia’s most populous and expensive housing market, Sydney.

For the week, the city recorded a preliminary clearance rate of 81.9%, a far cry from the 56.2% level seen 12 months earlier.

Melbourne, Hobart, Canberra and Adelaide all recorded preliminary figures of more than 66%.

This table from CoreLogic shows the performance of each individual capital city last week, comparing the results to those seen in the same corresponding week a year ago. The group will release finalised figures for the week on Thursday. 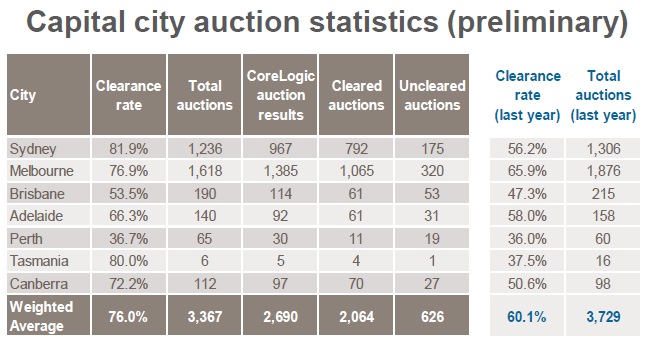 However, while auction clearance rate across the country remained firm, there was somewhat of anomaly last week: capital city house prices weakened as a whole, led by declines in Melbourne and Sydney.

According to CoreLogic’s separate capital city home value index, prices nationally fell by 0.4% with those in Melbourne and Sydney sliding by 1.2% and 0.3% respectively.

Elsewhere prices rose in Adelaide and Perth and were flat in Brisbane.

The large weighting of the Sydney and Melbourne markets explains the weakness in the overall index. 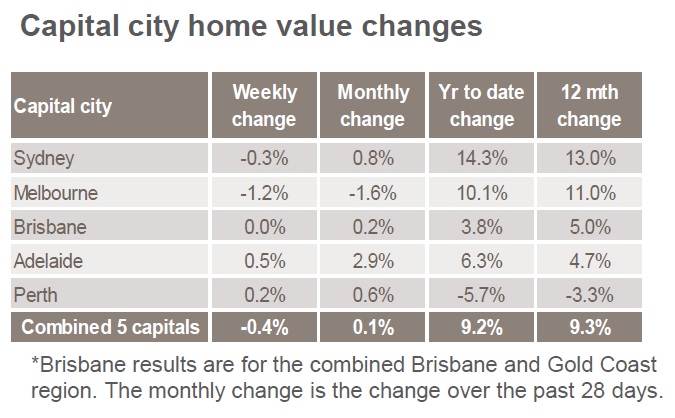 As a result of the weekly decline, gains over the past month slowed to just 0.1%, thanks entirely to price declines in Melbourne over that period.

While price growth has been strong in 2016, some, including HSBC, believe that Australian capital city house price growth will slow in 2017.

The bank expects prices will gain by between 2 to 5% with continued strength in house prices expected to offset modest weakness in apartment markets.