Australians under 40 are being locked out of home ownership - a dynamic that is driving inequality, writes Rob Burgess.

There can be no doubt about the link between this week’s dreadful home ownership and household income data, and growing inequality in Australia.

To see that link clearly, however, it’s necessary to go back to earlier versions of the same report.

That’s because the Household, Income and Labour Dynamics in Australia (HILDA) survey, released on Wednesday, only takes a full snapshot of household wealth every four years.

The latest full study of household wealth showed big moves between 2002 and 2014 – moves that are certain to have become even more pronounced today.

As the chart below shows, renters tend to have tiny fractions of the net wealth of home owners (note that the 2002 figures below have been adjusted for inflation into 2014 dollars). By itself, that’s not surprising because renters, by definition, tend to be those who can’t afford to get into home ownership. 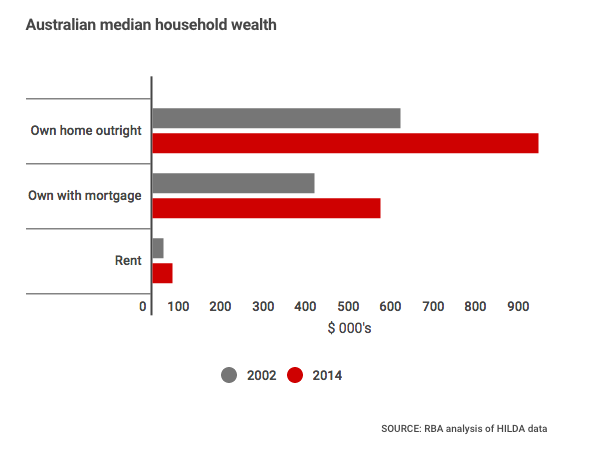 But that’s not the real source of growing inequality in Australia. It is, as this week’s HILDA data showed, the huge slump in home ownership in the under-40 age bracket.

Put simply, renters have always had it tough, but we’re now seeing a blowout in the number of renters for whom the property-based path to wealth creation is closed.

That’s particularly disappointing for those who want to see a nation of independent, financially secure young women.

That subset of the under-40s are not students hanging back at Mum and Dad’s for a few years. These are adults, starting families, and longing for a home of their own.

Such a pronounced blowout in wealth inequality makes any talk of ‘income equality’ beside the point.

When life’s traumas hit – the break-up of a household due to divorce, unexpected redundancy, or a member of the household being diagnosed with a life-threatening illness – income does not provide a cushion. In these situations it’s accumulated wealth that counts.

And that is what makes the past 17 years of Australian history such a disgrace. Policy makers and media commentators have mostly remained silent while a wholesale destruction of wealth equality has taken place.

There is a view among some laissez faire thinkers on the right of politics – who the Coalition parties call ‘economic dries’ – that wealth inequality is good thing.

Ludwig von Mises, one of the fathers of that strain of thought, argued in the mid-20th century that it was wealth equality itself that led western European nations to surge ahead of the fairly stagnant economies of nations such as India or China.

In 1949 he wrote: “The notion of equality which our contemporary welfare propagandists have in mind … is very clear in its abomination of large fortunes. It objects to big business and great riches … And it appeals to the envy of the injudicious masses.”

Many on the right of politics still find that argument convincing.

Where it breaks down, in early 21st century Australia, is that our new inequality is not about entrepreneurs zipping back and forth in private jets.

It is about going backwards from a basic form of equality that we successfully lived with up until the turn of the millennium – the equal access to a roof over one’s head.

Peter Costello, the economic-dry Treasurer who let loose the house price boom by applying a 50 per cent discount to the capital gains tax in 1999, can now see the result of that policy shift.

As it happens, this columnist has no problem with smart, risk-taking entrepreneurs delivering improved goods and services to consumers and then zipping about in their private jets. That’s healthy capitalism – the bit that von Mises was right about.

But watching a blowout of inequality based on tax breaks for property speculators?

Watching a nation reach a reasonably equitable position on housing, and then rip it all up?

That’s nothing short of disgraceful.

Rob Burgess is economics commentator for The New Daily, where this piece was first published. He his a former political columnist and commentary editor for Business Spectator. Prior to those roles he wrote for The Age and Guardian Weekly covering social issues and education, and for numerous business publications in the UK, Australia and Hong Kong.