Australian house prices surged in March, and it wasn't just in Sydney and Melbourne

Australian house prices continued to soar in March, and not just in Sydney and Melbourne.

According to the latest Hedonic Home Value Index released by CoreLogic earlier today, capital city house prices rose by a weighted average of 1.4% last month, leaving the increase on a year earlier at 12.9%, the fastest seen since May 2010.

And while prices in Sydney and Melbourne, the epicentre of Australia’s housing affordability debate, logged hefty increases of 1.4% and 1.9%, they were actually outpaced by gains in several other capitals during the month.

This table from CoreLogic shows how prices in individual capital cities fared in March. 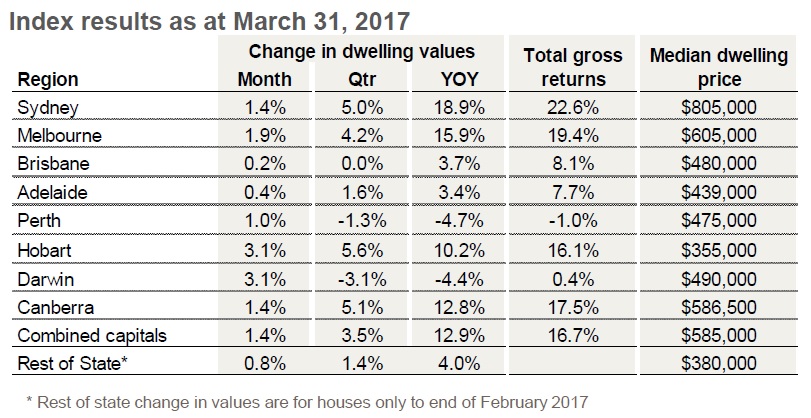 At 3.1% apiece, prices in Hobart and Darwin recorded the strongest growth in prices, while those in Canberra and Perth logged gains of 1.4% and 1.0% respectively.

Adelaide and Brisbane recorded more modest increases of 0.4% and 0.2%.

While the price growth was uneven across the capitals, with all capitals recording an increase in prices over the month, it suggests that the strength in the Sydney and Melbourne markets are now spreading across the country.

For the quarter, prices rose by over 5% in Sydney, Hobart and Canberra, and in excess of 4% in Melbourne.

Adelaide, at 1.6%, was the only other capital to register an increase. Elsewhere, prices were flat in Brisbane but fell in Perth and Darwin.

In weighted terms, and largely reflective of ongoing strength in Sydney and Melbourne prices, prices across the nation’s capitals rose by 3.5% over the quarter.

A huge increase, and one that suggests demand for property remains as strong as ever despite out-of-cycle mortgage rate increases from lenders and the threat of tighter lending restrictions, and potential changes to the tax treatment of housing, from Australian policymakers.

As a result of the enormous increases registered in the quarter in Sydney, the median dwelling price in the city surged to $805,000, up 18.9% on a year earlier.

CoreLogic said that was the fastest annual rate of growth recorded since November 2002.

Prices in Melbourne rose by 15.9% over the same period, and by over 10% in Canberra and Hobart.

Prices in Brisbane and Adelaide rose by a smaller 3.7% and 3.4% over the past 12 months while those in Perth and Darwin — most exposed to the mining sector — fell by over 4%. This result is largely reflective of weaker economic conditions, increased supply and population trends across the country.

The variance in prices across the country in the past year underlines the multi-speed housing market we’re seeing at present, and underscores why the most acute concerns over financial stability risks and housing affordability are centred around Sydney and Melbourne.

As this chart from CoreLogic reveals, the median dwelling price in Sydney has now increased by 109.2% since January 2009. Prices in Melbourne, at 92.4%, have also risen substantially over the same period.

This article was originally published by DAVID SCUTT on the 3 April 2017 via businessinsider.com.au