Australian housing investors are back

This article was originally published by DAVID SCUTT on the 10 Nov 2016 via businessinsider.com.au | Photo: Glenn Hunt/Getty Images

After a regulator-imposed slowdown earlier this year, it’s clear that housing investors are returning to Australia’s property market.

According to housing finance figures released by the ABS on Thursday, the value of loans extended to housing investors surged by 4.6% to $12.416 billion in September in seasonally adjusted terms.

It was the sixth month in eight that the value of investor lending increased. Not only that, it was the largest monthly total in dollar terms since August last year.

Compared to the levels of a year earlier, the dollar value of lending rose by 9.5%, the first year-on-year increase since July last year.

It had fallen by as much as 25.9% year-on-year in April, due largely to tighter restrictions from Australia’s banking regulator, APRA, to bring annual growth in investor housing credit to below 10%.

According to private sector credit figures released by the RBA last month, the value of outstanding loans to housing investors rose by 0.6% in September, leaving the year-on-year increase at 4.8%.

It marked the the first annual acceleration seen since April last year. 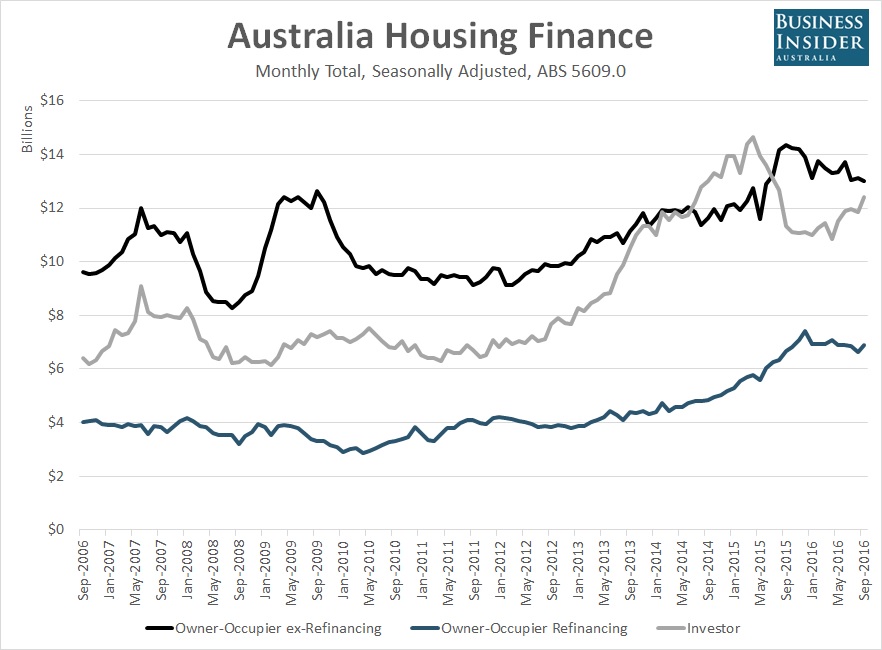 The increase in investor lending corresponds with a marked acceleration in property price growth in Australia’s largest and most expensive markets, Sydney and Melbourne, which have both seen their median dwelling price grow by over 10% since the beginning of the year,according to CoreLogic.

From January 2009, the median price for a Sydney property has risen by over 95%, and over 80% in Melbourne.

In it’s November monetary policy statement, the Reserve Bank of Australia noted that property prices had risen “briskly” in some markets, probably much to the disappointment of potential first home buyers in both cities.

It’s also noticeable that recent strength in Australian auction markets has been centred in Sydney and Melbourne, those traditionally favored by investors.

It looks like sales of smashed avocado toast will only continue to grow.

Though smaller than the increase registered for investors, the value of lending to owner-occupiers also increased, rising 0.9% to $19.885 billion.

The increase was driven by refinancing of existing loans which increased 4% to $6.883 billion. The value of new loans to owner-occupiers actually fell by 0.8% to $13 billion.

Combined with investors, total housing finance increased by 2.3% to $32.301 billion.

Fitting with the increase registered in owner-occupier lending, the number of loan commitments to this category also rose, ticking up by 1.6% to 54,449.

In original terms, the ABS reported that the proportion of owner-occupier loans to first home buyers stood at 13.1% in September, just above the all-time record low of 12.9% seen in March this year.

It must be remembered that this figure is for owner-occupier loans, not for those purchasing their first home as an investment.

Information on the total number of lending commitments to investors is not disclosed in the report.

Even so, given the clear acceleration in the value of investor lending, there’s now little doubt that investor activity in the market is picking up.

At a time when concerns over housing affordability are as elevated as house prices, expect the debate over the tax treatment of housing to remain as fierce as ever.