Apartment buyers in more than 87 suburbs across Australia – including swaths of Sydney, Melbourne and Brisbane – could face tougher hurdles to get a mortgage as one lender tightens its loan criteria. And experts say more could do the same.

In a note sent to brokers at the end of July, Citi pointed out 34 Sydney postcodes, 27 in Melbourne and 12 in Queensland where borrowers would have to jump through additional deposit hoops and face more stringent practices around cash out loans.

A further eight suburbs in Perth, five in Canberra and one in South Australia were also on the list, a spokesperson from Citi confirmed.

The maximum loan-to-value ratio was dropped by 15 per cent – which could require borrowers to stump up a deposit as big as 35 per cent in some areas.

Scroll down to see a full list of suburbs

Buyers of new apartments, high density apartments and apartments bought through a property developer “regardless of age,” would be affected.

It’s likely these areas were predominantly picked due to the high levels of supply of new apartments after a record building boom, said AMP Capital chief economist Shane Oliver.

He said the suburbs “tend to line up with crane maps” – which are aerial images of the capital cities from Rider Levett Bucknall’s Crane Index that highlights building activity hotspots.

In Sydney, areas on the list were as diverse as the student heartland inner suburb of Ultimo, building boom areas around Ryde and Parramatta, and 30 kilometres away in the Hills District’s Castle Hill and Kellyville.

“The bulk of supply is still ahead of us, banks are still concerned and the risk of oversupply is up,” Dr Oliver said.

He made past predictions about a crash in apartment prices in Sydney, Melbourne and Brisbane of up to 15 per cent – and maintained this is still on the cards.

The postcodes on Citi bank's radar 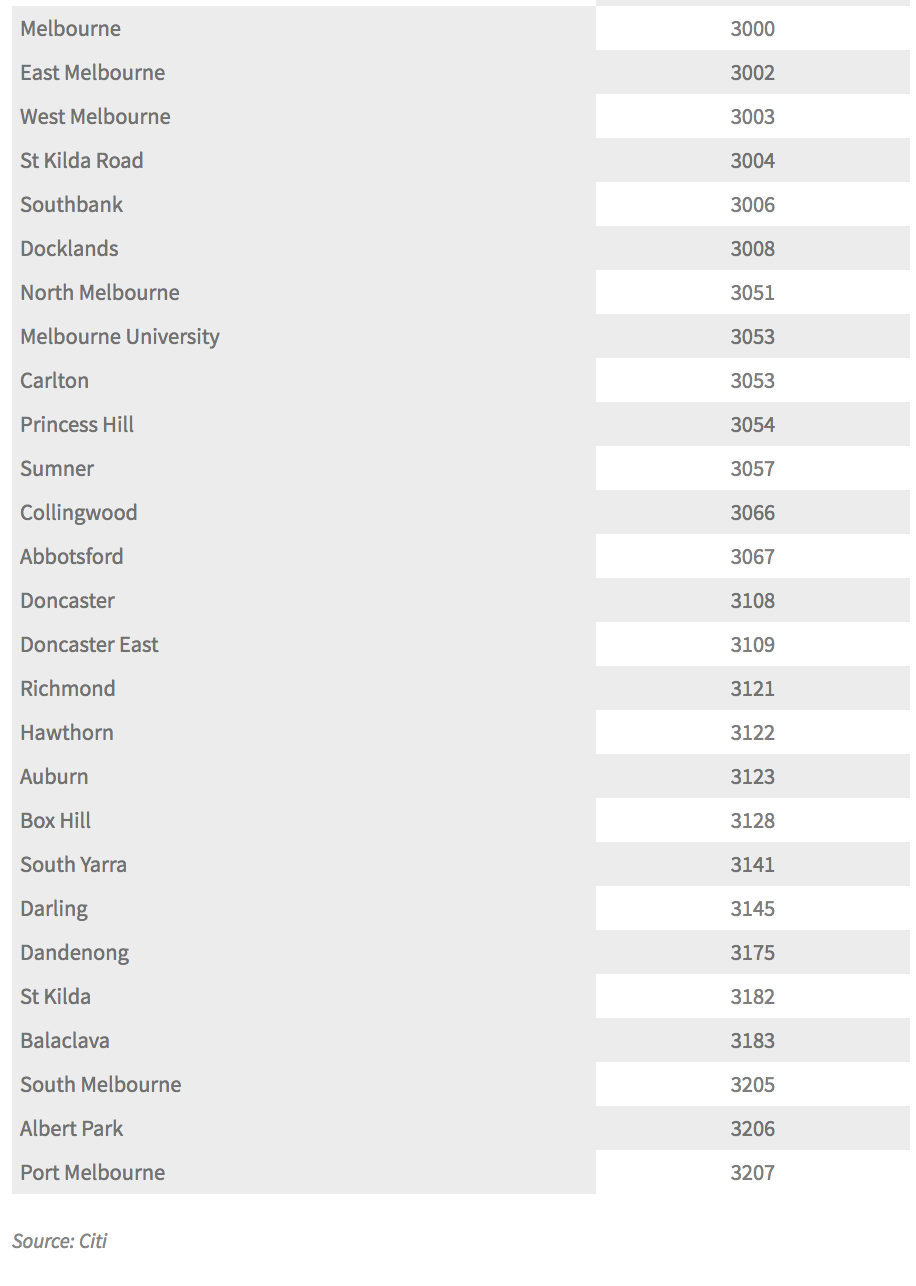 But Compass Economics chief economist Hans Kunnen said it was a “self-preservation, risk-aversion” approach from the lender, yet he wasn’t convinced crash-style price falls were likely.

“Many people have talked a lot about oversupply in certain markets, and they’re responding to that,” Mr Kunnen said.

“This is not going to stop people – just make it harder for some,” he said.

“I don’t think their worst case scenarios are likely to be met … but they’ll be covered if they are.”

He described the move as “highly conservative but understandable”.

Caution from the banks is usually related to concerns about potential defaults – where the borrower is unable to meet their repayments – and whether they can get their money back if they have to sell, BIS Oxford Economics senior research manager residential Angie Zigomanis said.

Mr Zigomanis’ research on the new apartment market found they already had “a premium to the existing stock” leaving them taking a hit at re-sale.

“This has been papered over in markets like Sydney, where there has been strong growth all round.

“However, it is likely that with the cycle in Sydney approaching a peak – if not have peaked already – more recent buyers will not have the benefit of a rising market to lift all boats.”

He has long tipped most capital cities in Australia – with the exclusion of Sydney – to be facing an oversupply.

Sam Ghoreyshi a mortgage broker for Smartline said this move from Citi was not unexpected – after similar moves from bigger lenders last year.

“The late stage on the property clock suggests that moderation of prices or even some decline is only a matter of time and of course, banks would be mindful of this and will lower their risk to such properties,” Mr Ghoreyshi said.

And it’s likely there will be more lenders who go down the same path, Mortgage Choice chief executive John Flavell said.

In October 2016, NAB put 600 towns and suburbs across Australia on its own blacklist. In 120 of these, a 30 per cent deposit would be required, including in large swathes of rural Western Australia, South Australia, Northern Territory and Queensland.

In inner-city apartment suburbs in much of Brisbane, Sydney and Melbourne, a 20 per cent deposit was required.

“In the past, we have seen a number of lenders highlight certain areas as ‘high risk’,” Mr Flavell said.

“Moving forward, I would expect all of our lenders to continue to keep a close eye on the market. Infrastructure will continue to be closely monitored, as will property price growth.”

Multifocus Properties and Finance chief executive Philippe Brach said when changes came through from lenders it was like “wildfire”.

“We’re getting almost four policy changes a day … it’s hard to keep up,” he said.

As a mortgage broker and adviser, he said he kept investors away from buying off-the-plan due to the uncertainty about how the rules around finance might be in two years time when they were finally built.

Earlier in 2016, AMP also put 140 suburbs on a blacklist due to concerns about oversupply and off-the-plan properties.

HIA senior economist Shane Garrett said new dwelling starts reached an all-time high in 2016, but would drop by 24 per cent off this peak by 2019 to a trough of 175,000 starts a year.

“The apartment side of the market is likely to see the largest reduction in building activity,” Mr Garrett said.

“This is partly the result of heavier restrictions on foreign investor participation in the market which risk depriving rental markets of sufficient supply.”

Queensland-based PRDnationwide national research director Diaswati Mardiasmo said these were suburbs where there had been a “crazy amount of development happening”.

​Some of the suburbs on the Queensland list, including Fortitude Valley, Chermside, Woolloongabba, Greenslopes, Coorparoo and Seven Hills, had recorded falls in median price in the past 12 months, while almost all of them had seen a decline in rental yield.

And vacancy rates is all these areas were above the 3 per cent “healthy” benchmark, except for Coorparoo, Dr Mardiasmo said.

“The number of apartments going in, scheduled to commence from 2017, is quite large too which is a further concern,” she said.

But Domain Group chief economist Andrew Wilson was skeptical as to why they’d chosen to restrict lending based on fears of an oversupply in Sydney when vacancy rates were tight and rents for apartments were increasing.

While he said there was more of a case for lenders to be wary in cities such as Perth, where prices have fallen backwards for some time, he said it was likely it was bottoming out.

And while he thought Sydney was “probably at the peak” he couldn’t see any reason for prices to decline.

This article was originally published by JENNIFER DUKE AUG 9, 2017 via domain.com.au