There's no shortage of housing forecasts but none quite like this one: rather than the key markets cooling, they are about to be hit by a demographic tsunami.

And, should that be the case, the tricky bit is that the higher demand will meet reduced supply. The consensus view is that building approvals have certainly peaked and housing construction, while still strong, is set to substantially decline.

Such an interaction of increased demand and decreased supply would move prices higher – and this scenario is being painted for the most painful part of the ownership landscape: would-be first-home buyers.

Amidst the deluge of demographic statistics this week, one particular segment caught the eye of property analyst Pete Wargent: a surge in prime Gen Y FHB candidates. 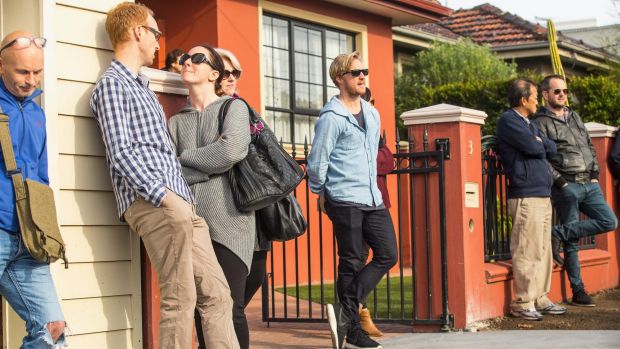 A story favoured by the permabears who have been forecasting a housing crash for the past decade or so is that housing construction has outpaced population growth and therefore it will all end in tears – any year now.

A more reasoned story is that the almighty surge in construction has been playing catch up with the population after a decade of under-building.

But it's not just the total number of people that drives housing formation and, therefore, demand for extra housing, but the number of particular types of people.

Wargent writes that it's necessary to drill down a level to get the really interesting demographic stuff. 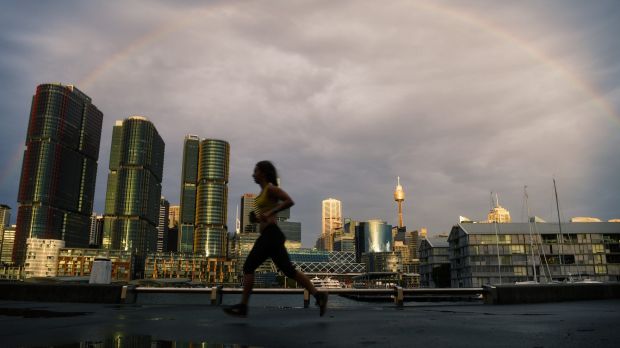 While the census showed Australia overall is aging, there's been a noticeable lift in the number of people aged between 25 to 32.

As the accompanying graph shows, there are more than 360,000 in each of those eight year groups, after which numbers fall away to fewer than 311,000 39-year-olds. 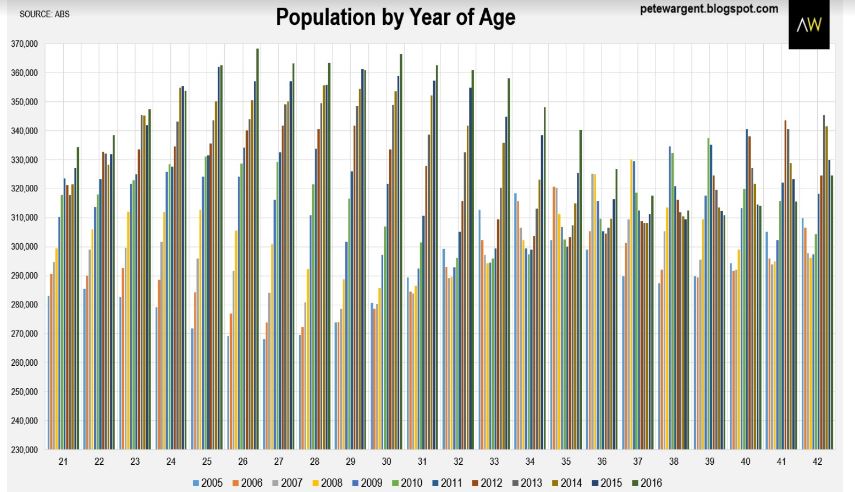 That represents a boom in prime would-be or wannabe FHBs. It's what Wargent calls a demographic tsunami, "a monster surge in housing market demand on its way in due course".

As luck would have it, the surge is focused on what are already the hottest (worst) markets for FHBs

"Sydney and especially Melbourne have a comparatively high share of their population pyramid sitting squarely in the 25 to 34 age brackets, but in Adelaide and regional South Australia the equivalent share is much lower," notes Wargent.

As well as the traditional attraction of young people to the Bright Lights, Big City for employment opportunities, Sydney and Melbourne also dominate skilled migration which itself tends to skew younger.

And then there's education – inherently a predominantly Gen Y category. In a 2015 parliamentary submission on drivers of housing demand, the Reserve Bank's fingered the importance of international students:

"While any net immigration will boost demand for housing, the nature of that demand will depend on the life stage and circumstances of the newly arrived residents. The high fraction of students and former students in the flow of new migrants to Australia implies that the households they form will be younger than average, have lower incomes (at least initially) and be less able to purchase property (without familial assistance) than the average household already resident in Australia.

"This might result in lower home ownership rates than if migration had been lower or less concentrated in student visa entry. Student migrants will also be more likely to demand housing that is close to universities, city centres and other amenities rather than detached houses on the fringe of cities. It is also noteworthy that New South Wales and Victoria receive a disproportionate share of net student arrivals – more than two-thirds of the total – with projected contributions to total annual population growth of around half a percentage point, compared with 0.3 percentage points or less in other states."

The RBA was using Department of Immigration forecasts that international students would be the big movers in net migration. The forecasts have proven accurate.

Arrivals for education nudged 125,000 in February this year. The government counted 492,964 international students in Australia in April, 14 per cent more than at the same time last year. 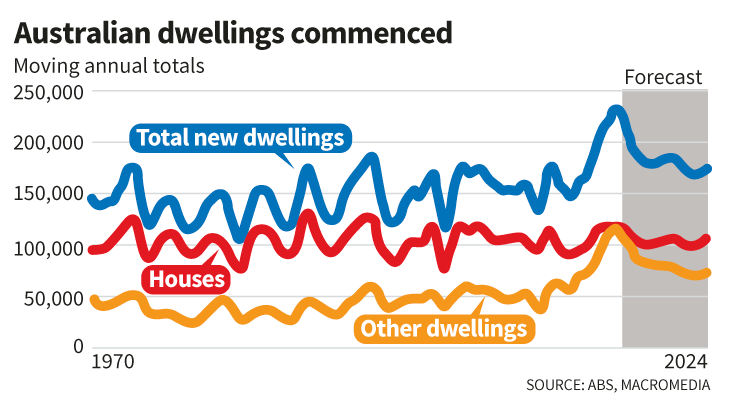 Whatever the source of Wargent's "demographic tsunami", the housing truism applies: "they have to live somewhere".

Many in Gen Y surge are not be able to afford to buy their first home. Increasing numbers of locals are permanent residents at The Folks' Hotel, but most will add to demand in the rental market. Which means increased demand for housing just as much as being able to put down a deposit.

Which is where the supply curve cuts in. The identified Gen Y housing formation surge will build over the next few years just as housing unit construction is expected to be falling.

Industry analysts Macromonitor  have housing completions dropping sharpishly over the next two years with most of that fall being in units – the sort of Melbourne and Sydney properties would-be FHBs are most likely to live in.

Brisbane and Melbourne CBD developers have been caught getting ahead of demand, but it now looks like the overall industry is cooling ahead of a fear that prices will cool, which will mean prices will be supported.

And if Pete Wargent's demographic observation bears fruit, major parts of the key markets are likely to be supported strongly.

This article was originally published by Michael Pascoe on the 30th June 2017 via www.smh.com.au