Charles Dickens famous novel ‘A Tale of Two Cities’ best captures the economic and financial market turmoil that everyone has been experiencing in 2011;

Lately, I have seen many examples of the media thriving on the ‘doom and gloom’ of the current environment, and for most people it’s been one big rollercoaster ride, with the bailout of the US debt market, the decline and possible talk of the breakup of the of the European markets and single Euro currency, and the near collapse, then subsequent recovery of the Australian stock market.

This fear-mongering bandwagon, which the media loves to jump on, has created a very negative overall consumer sentiment in Australia. In fact, Australians have reverted to increasing their spending equivalent to that of the 1985 era, delaying the purchasing of big-ticket items, and, many first home buyers are delaying their entry into the property market. This, in turn, has resulted in low clearance rates of 50% across the major capital cities in 2011, low volume of new listings and a slight decline in the median price across the major capital cities, seen in the table below. 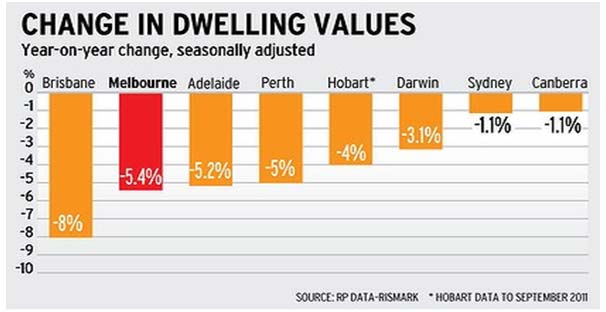 Simultaneously, all of this has created ideal buying opportunities for ‘cashed-up’, and market ready property investors who are capitalising on the dire market conditions, by negotiating massive discounts on blue-chip properties, in premium locations across the major capital cities. Not only are there bargains to be had after a property is passed in at an auction, I have personally witnessed developers slashing tens of thousands of dollars of existing and off-the-plan stock, in an attempt to sell out projects before the end of this uncertain and volatile year. It is truly a time of wisdom, and the age of foolishness.

With a high probability of substantial interest cuts in early 2012, coupled with escalating rental yields across the major capital cities, 2012 is looking like the beginning of the next strong upward trend in the property cycle, especially in Melbourne and Sydney. Many people will look back at 2011 and correctly identify it as the ‘best time to buy property’ under market value, and by that stage of course, it will be too late, as all the bargains will be gone, and market would have moved into the next phase of the property cycle.

One of the most fundamental principles of investing in property in Australia is to appreciate that the market moves in distinct cycles which are characterised by periods of strong capital growth and demand for properties, through to periods of a flat-lining market, following periods of distinctive falling median prices, lower demand for properties, and a decline in property prices. The money is made by both the timing of the market, and of time in the market. Hence my advice right now to investors is not to wait to buy property, rather, buy property and wait.

The general rule of thumb is that these property cycles last 7 to 10 years, and can be segmented into 4 main parts, the ‘Peak of the Market’ being the shortest of the four;

It is interesting to note that not only do these cycles vary drastically across the major capital cities in Australia, but the variance can be further observed on a smaller scale within the major cities themselves, for example in Melbourne the Western suburbs and Bayside are counter-cyclical to each other, while in Sydney, the North Shore and the Western suburbs at times have shown similar behaviour. Furthermore, these property cycles can be further characterised by a shifting balance between capital growth and rental yields, this relationship being largely an ‘inverse one’. That is, during times of strong capital growth, rental yields tend to drop as a percentage; the reverse is true during times of stagnant capital growth, or declining capital growth, when rental yields eventually catch up to the market, and increase as a percentage.

So what is the implication of all of this for the average investor?

In essence, successful property investors practice counter-cyclical investing, or they do the exact opposite of what the market is doing. When the consumer sentiment is low, characterised by low clearance rates of 50 per cent or lower, they buy. When the market is booming, which is usually the shortest part of the property cycle, sophisticated investors focus their energy of ‘revaluating’ their properties, and lock in their lines of credit (LOC) at the highest possible level, waiting once again for an opportunity to snap up a bargain at the low point in the market.

Perhaps the best example of ‘counter-cyclical-investing’ is that of the infamous Warren Buffett, who by age 79 built Berkshire Hathaway into a $198 billion company, averaging an annual growth in book value of 20.3% to its shareholders for the last 44 years, while employing large amounts of capital, and minimal debt. Warrens’ famous style of investing was encapsulated in a quote;

Remember that the ‘risk’ always lies with ‘you’, not with the market. The market is simply a vehicle that transfers wealth from the uneducated to the educated. The sooner you gain the necessary skills and education to take advantage of the property market, the sooner you will be making money and taking advantage of rare opportunities such as what the current property and share markets are presenting right now.