It is 30 years since Paul Keating famously said that if you walked into any pet shop in Australia "the resident galah will be talking about microeconomic policy".

There's a good chance those pet shop conversations have now turned to inequality.

During the past week the Opposition Leader Bill Shorten, Treasurer Scott Morrison, and even Reserve Bank governor Philip Lowe have all weighed in on the topic.

There are different perspectives on what's happened to income inequality recently. But the trend in wealth inequality is fairly clear. Governor Lowe says it has become "more pronounced" over the past five or six years.

If the latest figures on home ownership rates are any guide, the debate about inequality has a very long way to run.

The 2016 census, released in June, showed the share of home owners has slipped to 65.5 per cent, the lowest level in more than 60 years. There have been two distinctive features to this decade-long downward trend, one generational and the other geographical.

The decline in ownership has been sharpest among younger households. The 25 to 34-year-old cohort stands out. In 1986, 58 per cent in that age group owned a home but that's shrunk to 45 per cent.

There has also been a marked decline in home ownership in the suburbs of our biggest cities, especially Melbourne and Sydney. Analysis by the Grattan Institute think tank shows the rate of home ownership fell in 95 per cent of Melbourne suburbs between 2011 and 2016 and in 87 per cent of Sydney suburbs.

The scale of the decline in many inner and middle-ring districts is striking.

In 10 of Melbourne's "level 2" statistical areas (which normally combine two or three adjacent suburbs depending on their size) the home ownership rate plunged by more than 9 percentage points between 2011 and 2016. That includes Abbotsford (-14.2 per cent), Brunswick East (-9.3) and Maribyrnong (-9.1).

There were similar falls in a clutch of Sydney's middle ring neighbourhoods including Arncliffe-Bardwell Park (-12.7 per cent) Homebush Bay-Silverwater (-9.6 per cent) and Castle Hill-East (-9.1 per cent). 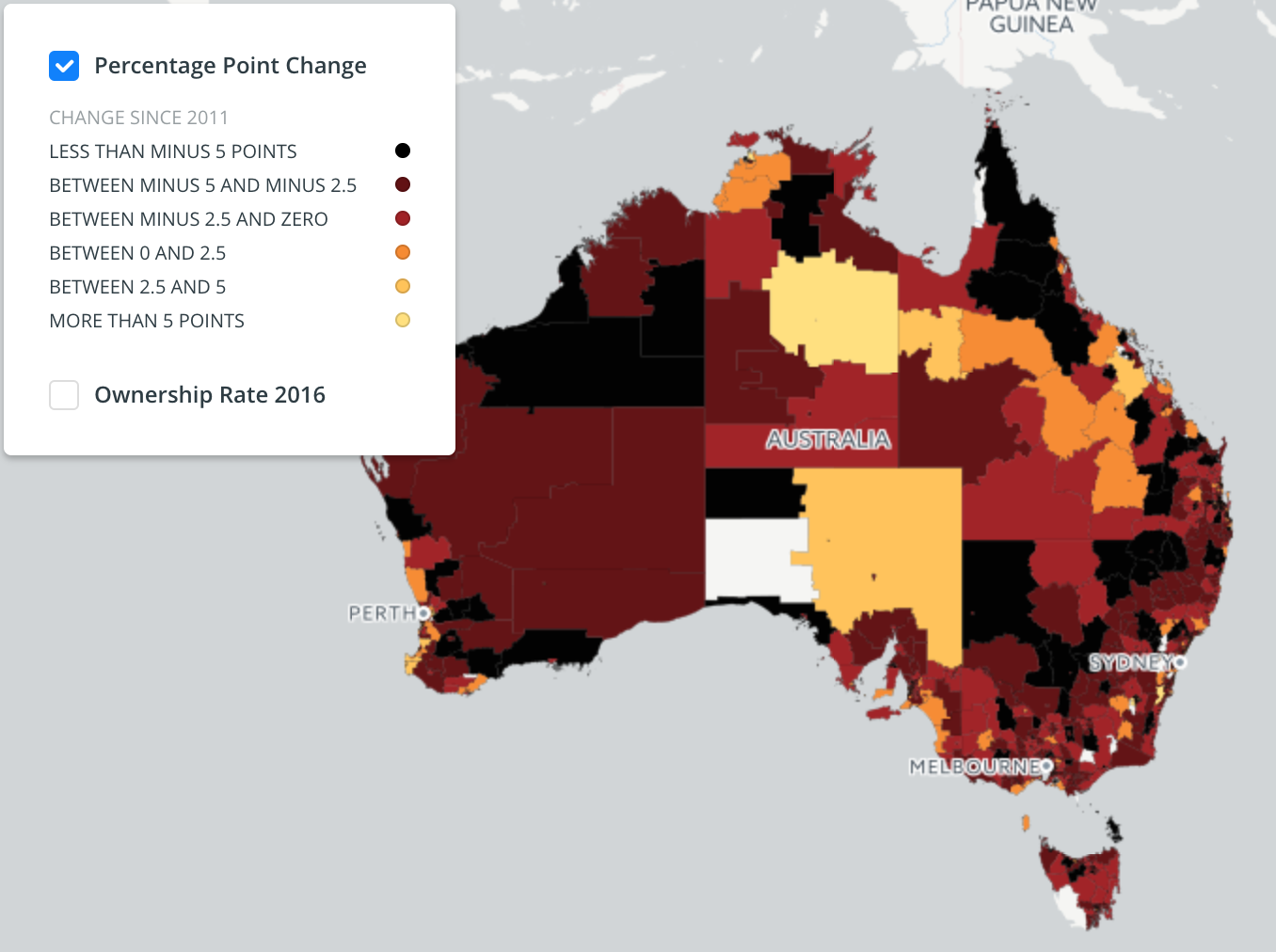 Complex demographic and economic forces have underpinned the decline in home ownership. A long-term trend for young adults to delay having children has played a role. The surge in house prices has also been a major factor. It is no coincidence the sharp falls in home ownership across Melbourne and Sydney recently, and a rise in the share of renters, coincides with a period of rapid property price growth.

Analysis by Sydney University housing economist Dr Judy Yates shows that renters have far less wealth than home owners at every point of their life-cycle.

Because the family home is by far the biggest source of wealth accumulation for Australian households, when the rate of home ownership declines the pool of "wealth have nots" grows.

That poses some thorny challenges, including for government budgets.

Last Tuesday, for instance, the Australian Housing and Urban Research Institute released research showing that, at the current rate of home ownership decline, the number of households eligible for rent assistance will be 61 per cent higher by 2031 than in 2011.

Australia's retirement incomes system, which assumes a high rate of home ownership, will also come under added pressure as more people enter retirement without owning property or still paying off a mortgage.

Stand by for plenty more debate about wealth inequality.