Five graphs that show what’s next for the property market

This article was originally published by CHRIS KOHLER on April 5, 2018 via domain.com.au

Australian house prices will push modestly higher this year and ramp up in 2019, according to ANZ economists, who say outright price falls are off the table.

National house prices are just 0.8 per cent higher than they were 12 months ago – a far cry from the 10 per cent growth seen in the previous year – but ANZ doesn’t expect the slowdown to deepen from here.

Total growth of 1.8 per cent across the country is now forecast this year by ANZ, picking up to 3.6 per cent growth in 2019, with Melbourne and Hobart expected to outperform.

“We think most of the slowdown has already occurred,” the economists wrote this week. “We retain our view that prices will not materially decline.

“We think most of the slowdown has already occurred.”ANZ senior economists Daniel Gradwell and Joanne Masters

“Over the near term, auction results in Sydney and Melbourne suggest that the majority of the price growth adjustment is behind us.”

A strong labour market and rising incomes will drive price growth, the economists argue, after pushing back their Reserve Bank rate hike predictions to mid-2019 from two in 2018.

But Morgan Stanley analysts aren’t so confident, with risks seen to be building in 2018 after several months of house price weakness and possible further top-level regulatory pressure.

“Conditions for housing for the remainder of 2018 continue to look challenging with further regulatory tightening of credit, an increasing stock of properties to be settled, and continued uncertainty on government policy for housing as the election cycle looms,” equity strategists led by Daniel Blake wrote to clients this week.

“This leaves us cautious on the outlook not just for housing, but the broader economy in 2018, given the leveraged exposure of the economy to the property market.”

The absence of higher official interest rates this year will support house prices, according to ANZ, with the bank’s economists seeing strengthening national property prices into 2019. 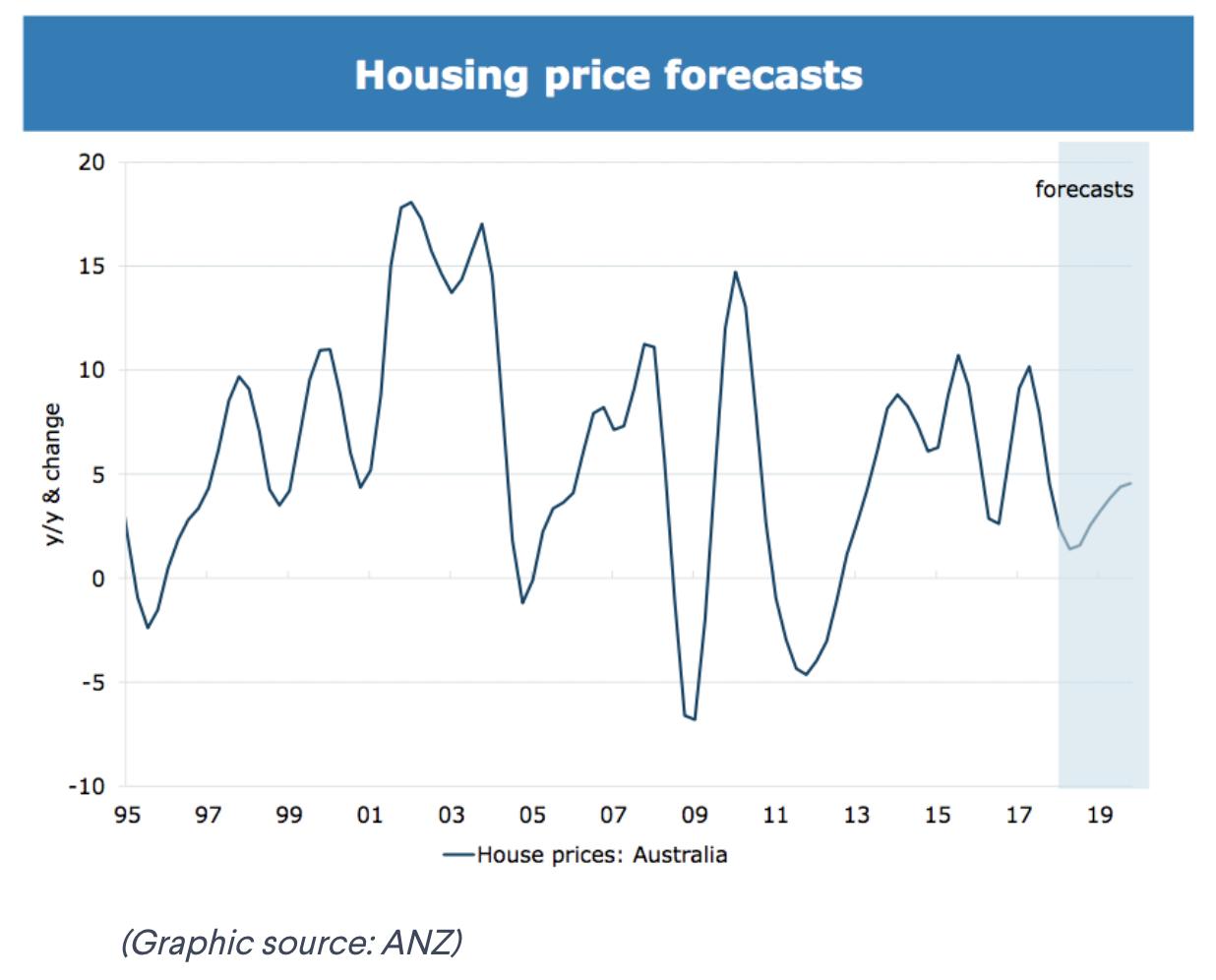 Melbourne is predicted to continue to outperform Sydney, while Brisbane is also forecast to see solid growth next year. Hobart is forecast to push higher and both Perth and Darwin are expected to pop back into positive annual growth territory in 2019. 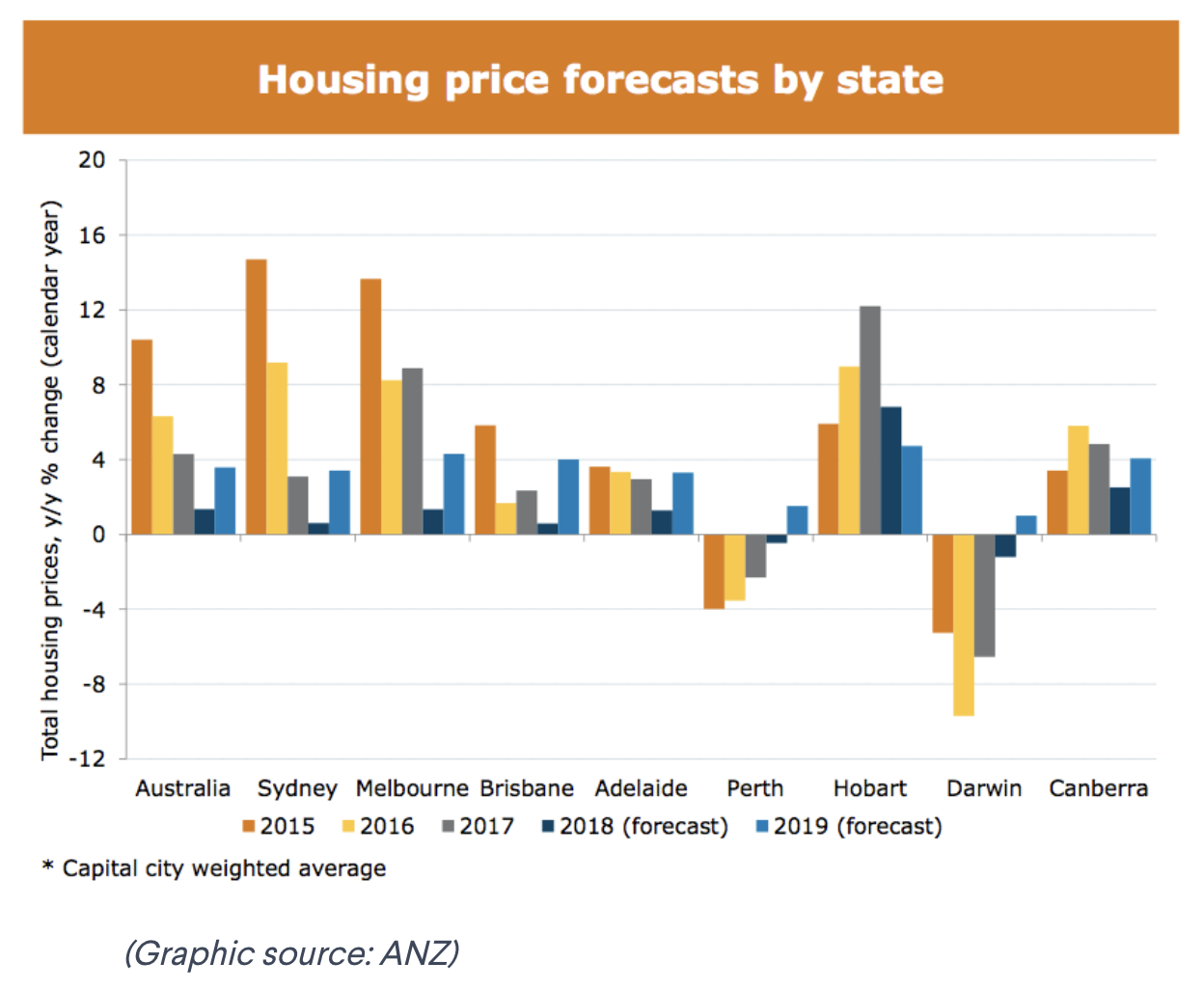 Tighter regulations governing the number of investor and interest-only lending major banks can write has seen a significant pullback in buying activity from those types of buyers, ANZ research shows. 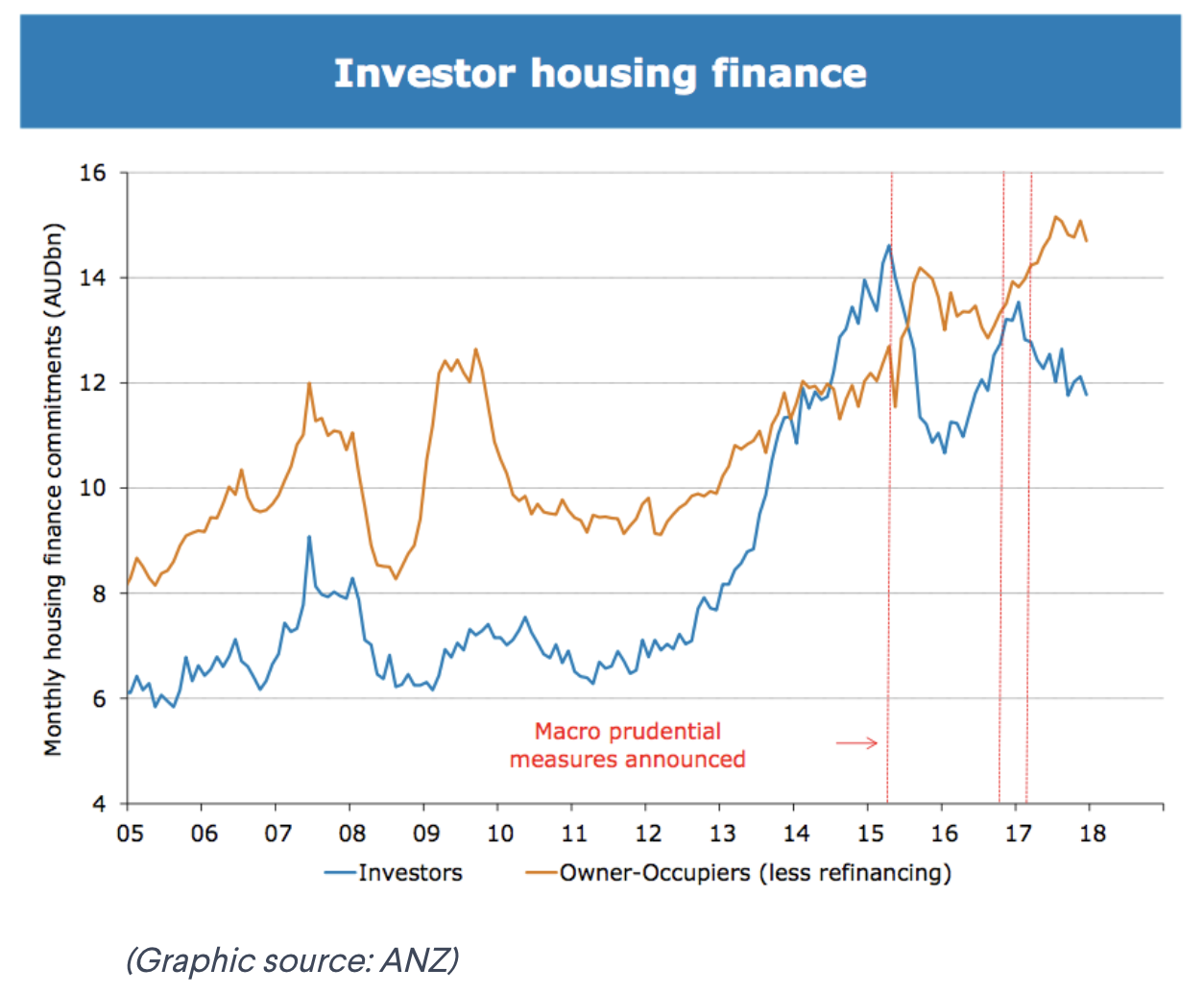 But government grants and sizeable stamp duty tax concessions in NSW and Victoria have helped spur a revival among first-home buyers – their return to the market is said to be helping plug the hole left by investors.

“APRA’s changes are driving investors out of the housing market,” Mr Gradwell and Ms Masters wrote.

“To a large extent they are being replaced by first-home buyers, who are enjoying stamp duty discounts in New South Wales and Victoria.” 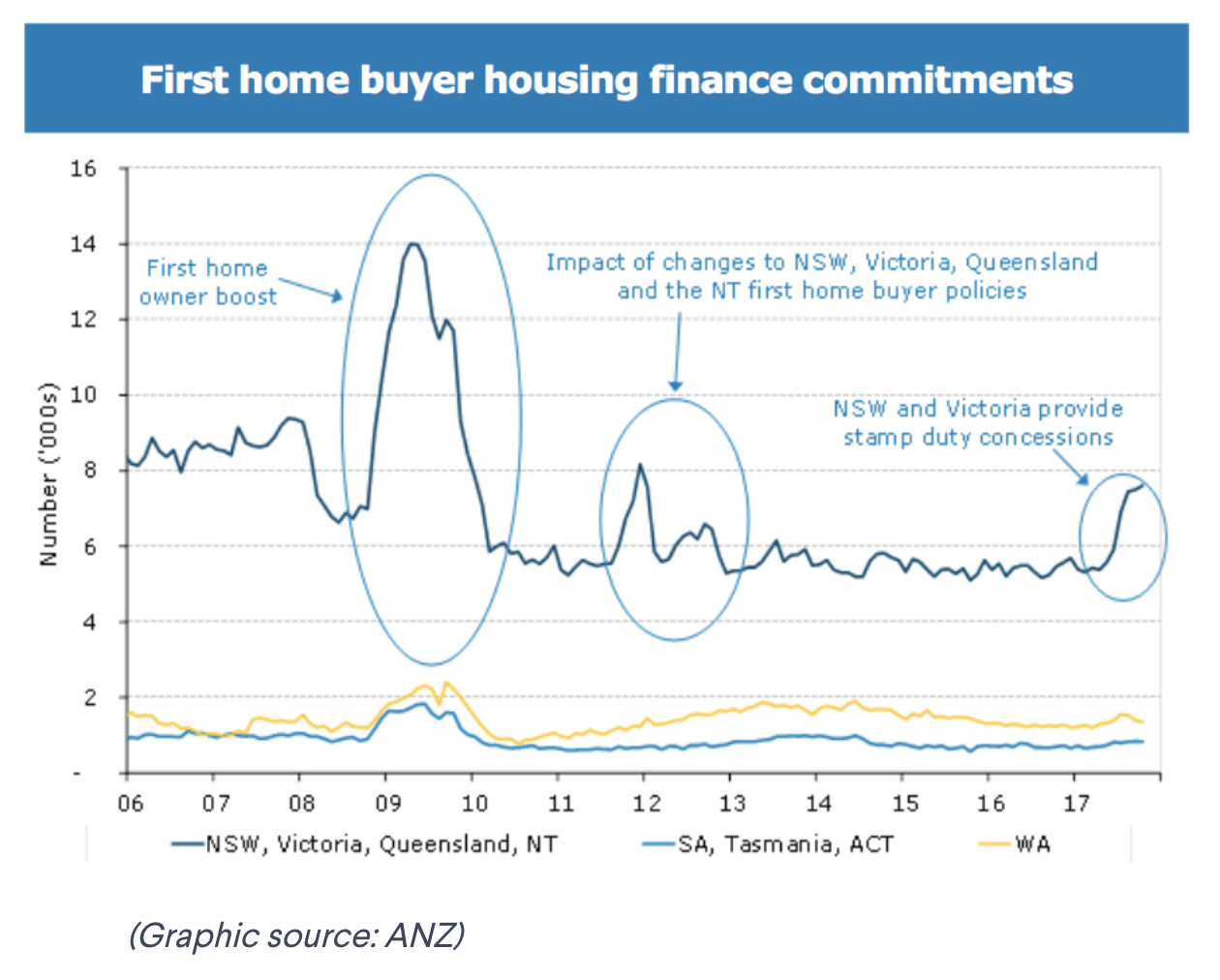 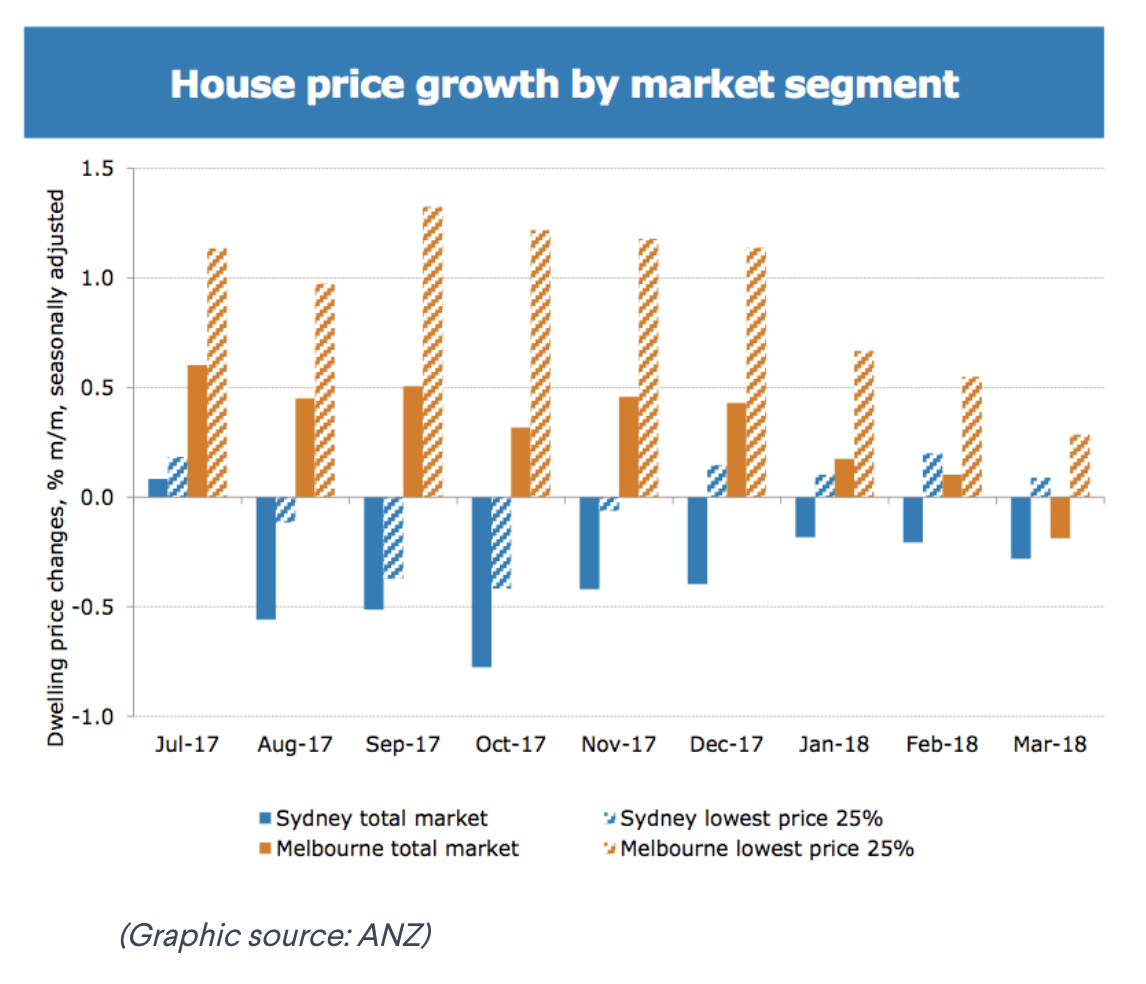 The main risks to ANZ’s forecasts are the potential for the RBA to hike rates sooner than expected, squeezing heavily indebted households.

“Indeed, we do not expect the RBA to hike rates until 2019, and then by only 50bp [basis points] in the year which is unlikely to hit affordability in a material way. Moreover, most households continue to hold a solid buffer.”

And while Morgan Stanley remains cautious on the property market, the analysts concede consumer confidence has remained above trend, and building activity has also outstripped expectations.

“These factors are holding up better than past relationships with prices would suggest, which in turn sees the broader impact of the slowdown in housing prices being limited – so far,” the equity analysts wrote.