The number of million-dollar homes in Australia’s major cities continues to increase, the latest research from CoreLogic shows.

CoreLogic analyst Cameron Kusher has run some numbers on Australian property sales for the 12 months to June 30, with a focus on the magical seven-figure mark.

According to Kusher, 47.8% of houses in Sydney sold for at least $1 million. 21% of unit sales also cleared the seven-figure mark.

To put last financial year’s sales in perspective, Kusher included a table showing comparative million-dollar sales from 10 and 20 years ago.

Back in 1997, million dollar property sales were a rare occurrence — just 0.6% of homes across the country were sold for more than $1 million.

There’s now almost a 1-in-4 chance that a house in Australia will sell for at least that much.

Here’s the table which shows how each capital city compares: 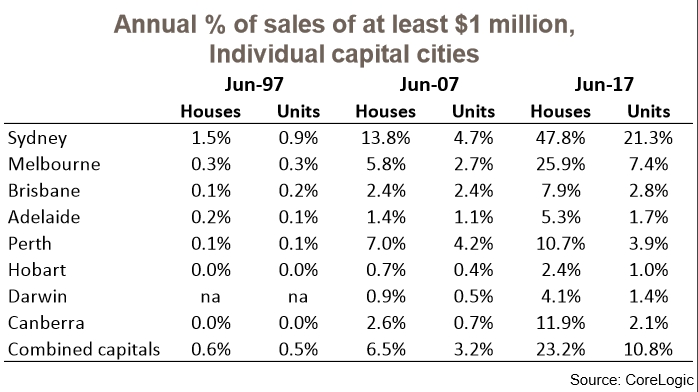 As expected, Melbourne is a clear second for home sales of at least $1 million. Across every capital city in the country, the percentage of million-dollar homes sales in 2017 was higher than it was 10 years ago.

Perth was the only city where the number of million-dollar unit sales this year was lower than in 2007.

Looking outside of the capital cities, 4.1% of houses in regional areas sold for at least $1 million in the 12 months to June, up from 3.5% in the prior year.

Kusher expects that the clearance rates for million-dollar properties will be higher again by this time next year.

With that in mind, he remains of the view that housing affordability will continue to pose a difficult challenge for policy makers.

This article was first published SAM JACOBS on the AUG 10, 2017 via businessinsider.com.au