House prices defy predictions in 2016 by rising more than 15pc

Home prices defied forecasts they would stagnate in 2016 to grow more than they did during the "boom" year of 2015, according to year-end figures from property research firm CoreLogic.

Dwelling prices rose 15.46 per cent in Sydney while Melbourne had a rise of 13.68 per cent. Even the much-maligned Hobart and Canberra housing markets posted strong gains, rising 11.24 per cent and 9.29 per cent respectively.

The data disappointed economists hoping for a more subdued housing market in 2016. At the end of 2015, Sydney and Melbourne closed with 11.5 per cent and 11.2 per cent growth respectively across houses and units, according to CoreLogic.

ANZ had been expecting soft price growth and had forecast a 3 per cent price rise for NSW, a 3.2 per cent increase for Victoria, a 2 per cent gain in Queensland and an overall 2.8 per cent rise the country as a whole. 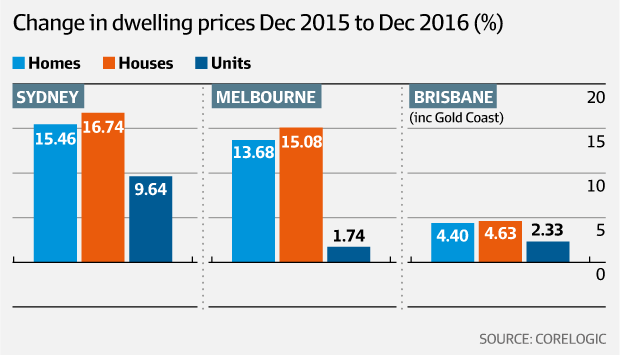 CoreLogic's head of research, Tim Lawless, had penciled in a 3 per cent rise for Sydney and a 1 per cent increase for Melbourne.

One forecaster who came close to getting it right was SQM Research's Louis Christopher, who predicted a rise of up to 9 per cent for Sydney and 15 per cent for Melbourne, given two cash rate cuts.

Low interest rates – the RBA cut the cash rate twice to 1.5 per cent last year – and the low levels of housing stock in Sydney and Melbourne have continued to drive demand and dwelling prices.

The strong demand for residential property has also seeped into peripheral cities, with Hobart among the best. But it's not yet enough to have mainland developers storming into the Tasmanian capital. 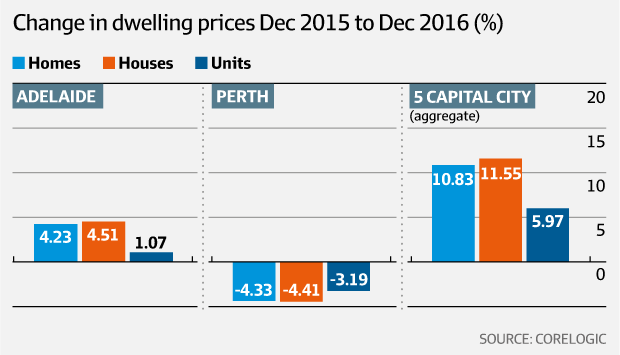 "You also have to ask, what has driven the double-digit growth? Bumper employment, new industries? And is the growth coming off a low base?"

The Brisbane-based group, which expanded into Sydney in 2016 to capitalise on the city's strong growth, won't be moving into Hobart yet.

There needs to be a steady pattern of strong price growth in Hobart to justify starting new projects, Mr Leahy added. 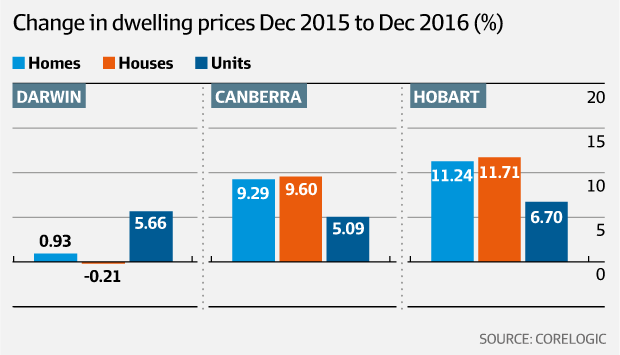 Similar to Metro, NSW newcomer developer Villa World has no plans to build in Hobart. "It's quite a low-volume market," chief executive Craig Treasure said.

The low volume, however, is mainly due to a lack of buyer awareness, Chinese property marketer ACProperty director Esther Yong said.

"There has been little education about Tasmania for Chinese buyers, but it is getting more popular now. Buyers won't think about Tasmania because it is not a big city and no one talks to them about it."

But local Sydney developer B1 Group, which has links with China's mega developer Shimao, said it would consider heading into Tasmania if the numbers stacked up.

"In the last few years, there has been a growing awareness of tourism and lifestyle advantages in Tasmania, and I think the residential market will grow," B1 chief executive Anne Bi said.

"I haven't looked at Tasmania in detail ... at first thought it was a bit far from the main cities ... but in 2017 I will really consider it and if the analyses are positive, we will go there."

Research group and buyer's agent Propertyology has tipped Hobart to be Australia's best-performing capital city in 2017, with its recovering economy, low median price and vacancy rate and increased buyer interests the main drivers. Hobart's median dwelling price is about $336,000, compared to just under $1 million in Sydney, according to CoreLogic.

"On an all things being equal basis, double-digit price growth is well and truly on the cards for Hobart in 2017," head of market research Simon Pressley said.