For buyers searching for a home in Australia’s mining towns, it is as though the nation’s unprecedented mining boom never happened.

Median prices in key mining centres in Queensland and Western Australia have fallen to below the average price of more than a decade ago, wiping out the capital gains of the iron ore and coal-fuelled boom.

In central Queensland’s Mackay — a hub for the coal-rich Bowen Basin — the $330,000 median house price is cheaper than the 2006 price of $338,000, according to figures supplied to The Australian by researcher CoreLogic.

Across the nation in Port Hedland, the $267,000 median sale price for a house is less than 30 per cent of the 2013 peak price and two-thirds of the average price of a decade ago. The region of Roebourne, which takes in the Pilbara port city of Karratha, has reverted to an average price of $278,025, a low not seen since 2005.

Investment in Australia’s biggest boom since the gold rush started picking up in 2003, before dramatically kicking off housing demand from about 2006. 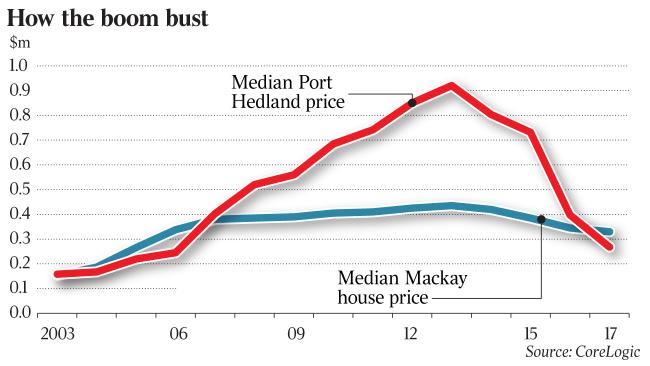 BIS Oxford Economics chief economist Frank Gelber said the boom had expanded mining towns’ housing stocks to service the multi-billion-dollar investment phase. “It was a wild ride on the upside and downside but the benefits to the community were temporary,” he said.

“People made a squillion along the way, and there were people who paid the price.”

He said housing oversupply lingered in the mining towns, and may never be filled. But in more diversified economies, increased supply had set up the towns for a future growth period.

For locals, the downturn has meant a return to a stable market where residents can again afford to buy.

After researching the market for six months, she found a home for about $300,000.

“I’m a first-home buyer and it is affordable to me,” she said. “It is really good that the market has stabilised to this level. It is really good that as a young person out of uni I can move in and I don’t have to do anything to it at all.” Mackay Explore Property owner Ben Chick said prices were now “relevant to the local community”, where there was optimism the worst had passed, with workers returning and renting.

He said there was also hope the proposed multi-billion-dollar Adani Carmichael coalmine could trigger future growth for the town.

“(The boom) has left a footprint for the future,” he said. “There are more high-rise apartments, more housing infrastructure, the industrial centre — this is all positive for the region.”

But he said there would be more caution in any future upturn, given the strength and savagery of the boom and bust was fresh in people’s minds.

Real Estate Institute of Western Australia president Hayden Groves said locals were starting to buy again in the mining towns of Karratha and Port Hedland, with homes selling for less than replacement cost. About one in five homes in Karratha were mortgagee-in-possession, and banks held about 600 properties across Port Hedland, Mr Groves said.

This article was originally published by ROSANNE BARRETT on the 24th July 2017 via theaustralian.com.au