If you thought it was hard to get into the housing market, it may yet get worse unless the Federal Government changes tax policies to reduce investor demand.

That is the warning of economists at Australia's biggest mortgage lender, the Commonwealth Bank.

While many economists expect home prices to stagnate or fall over the next few years, the Commonwealth Bank's economics team is predicting only a modest slowdown from this year's growth.

CBA senior economist Michael Workman said house price increases will slow to 5 per cent in Sydney and 7 per cent in Melbourne next year, with apartments weaker.

"The 20-year low in national wages growth of 2 per cent is a significant impediment to many households' ability to service more mortgage debt," he wrote in a note.

"There are some factors that could dampen the rate of capital gains across the marketplace later this year," he said.

"Affordability of course is one of those, very high supply levels coming through the unit market is another factor, mortgage rates starting to edge a little bit higher and potentially some sort of regulatory response to start to dampen the level of investment demand."

"So it does highlight that investors are really buying into those markets speculatively, hoping for future capital gains." 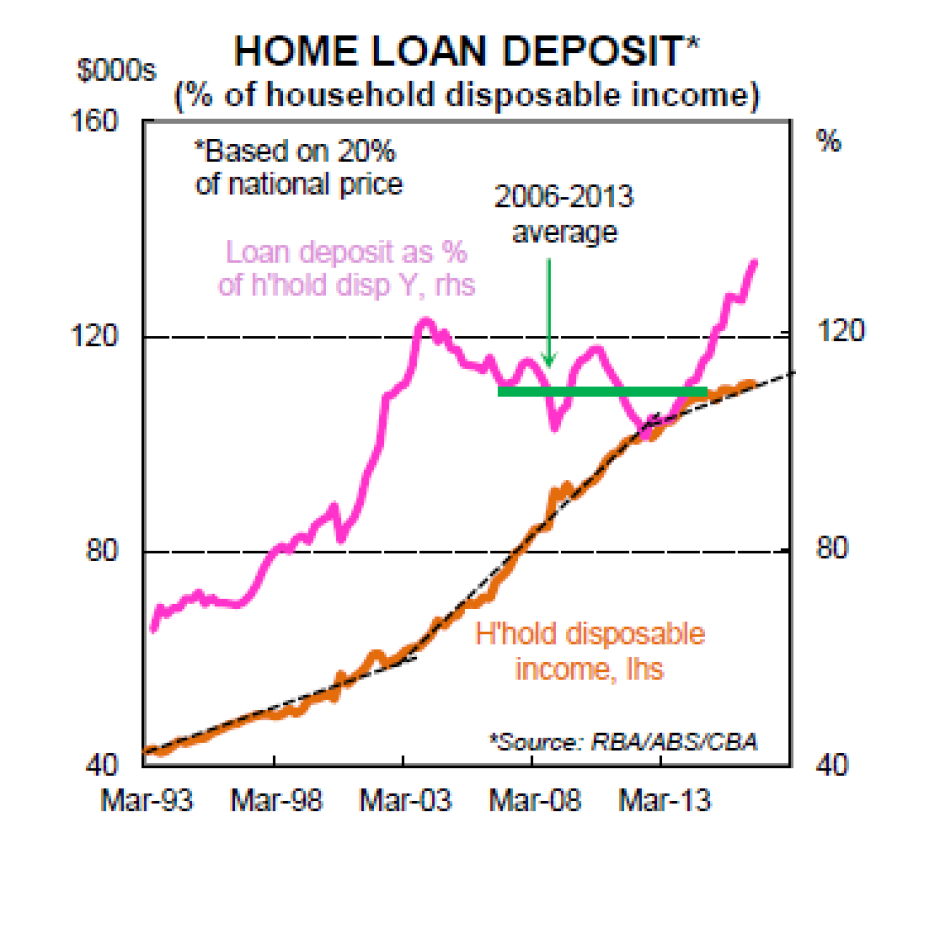 The level of housing deposits relative to incomes has surged over the past few years. (Supplied: RBA/ABS/CBA)

He observed that the Federal Government's series of income tax cuts in the early to mid-2000s helped keep affordability stable for first home buyers, but it has since deteriorated significantly.

"The amount required (as a proportion of annual average household disposable income) for a 20 per cent deposit on a dwelling purchase continues to move well beyond the reach of most households," Mr Workman noted.

While state governments and local councils are largely responsible for housing supply, the CBA economist said the Federal Government had to shoulder most of the blame for policies that boost demand and lift home prices.

"The Federal Government controls some of the significant demand factors for housing markets, namely population growth via migration and the spectrum of tax and foreign investment policies that significantly inflate demand for existing and new housing.

"Housing affordability can be improved, via stabilising growth in house prices and rents, by gradual reforms to both supply and demand issues."

He observed that strong price increases in the south-east cities reflected a resurgence of property investors in the real estate market.

"The pace of investment credit growth has really picked up," Mr Lawless said.

"This has been a consistent factor in the marketplace since May last year and, of course, that coincided with the first round of the latest interest rate cuts."

Reserve Bank figures out yesterday showed a 0.8 per cent increase in property investor loans in December - that is 9.6 per cent on an annualised basis.

Mr Lawless said the rate of growth might soon have the banking regulator, APRA, toughening its restrictions on lending to property investors.

"If you look at the more recent trend and annualise that out, it does look like investment growth is probably starting to surpass that APRA benchmark at 10 per cent," he observed.

"I wouldn't be surprised if we do see some additional regulatory changes that look to dampen the level of investment activity."

This article was originally published by Michael Janda on the 2nd Feb 2017 via abc.net.au