If history is anything to go by, Sydney's housing market may be about to get even hotter

This article was originally published by DAVID SCUTT on the 28 Oct 2016 via businessinsider.com.au

Sydney. It’s known for many things.

Being the most populous city in Australia is one. Having arguably the most beautiful harbour in the world is another.

It’s also known for having extremely expensive house prices, with that fact being pointed out by more and more people by the day.

Well, if you think that prices can’t go much higher, you better take a look at the chart below, supplied by ANZ. 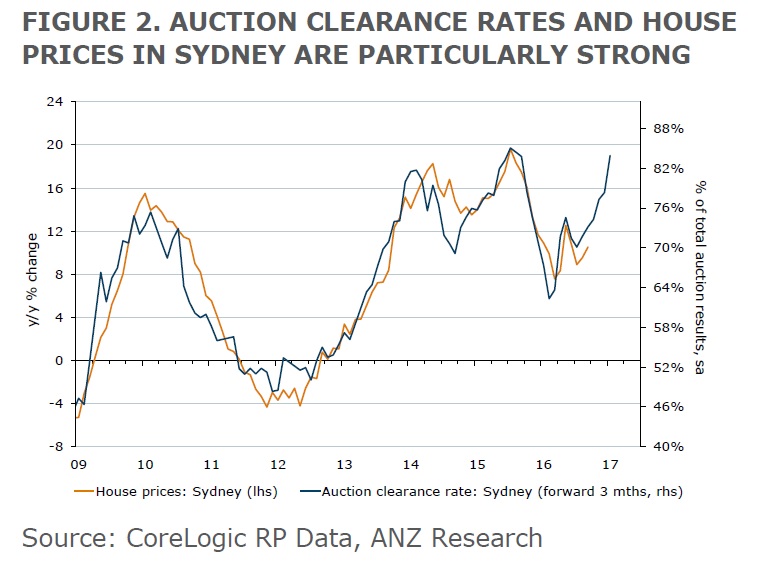 After dipping at the start of the year, clearance rates in the city have been ratcheting higher over the past six months, consistently printing above the 80% level in recent months.

Should the relationship between clearance rates and house prices be maintained, it suggests that already high house prices may be about to get that little bit higher.

Or perhaps more than a little bit.

This weekend there’s nearly 1,000 auctions scheduled in the city, according to data from CoreLogic, a noticeable increase on volumes seen earlier in Spring.

Plenty will be watching how the market performs, especially the RBA.

In the minutes of it’s October monetary policy meeting, the RBA underlined this point, noting that “housing price growth in Sydney and Melbourne had increased in recent months and auction clearance rates in these two cities had risen”.

As we’ve seen in the chart above, from a historic perspective, strength in the latter generally leads to price gains in the former.

That, says ANZ, hints that the RBA will forego the opportunity to cut interest rates again next week, despite continued weakness in inflation.

“In our view, concerns over financial stability are an important counterweight to weak inflation, where we think a key reason for the RBA’s reluctance to cut rates further is the strength in the housing market,” said economists at the bank.

“While this strength is largely confined to the Sydney and Melbourne markets, the heat in these markets amid already historically high household gearing counts strongly against the RBA acting on its easing bias.”

By Sunday, we’ll know whether the heat in these markets has cooled, or if it’s been turned up even further.