In the World’s Most Livable Cities, Hardly Anyone Can Afford a Home

This article was originally published by Emily Cadman via Bloomberg.com | 5 October 2017

Home ownership among young Australians has fallen to the lowest level on record, as an explosive property boom squeezes out all but the wealthiest.

Supercharged by record low interest rates, a lack of supply and a tax system that favors property investors, home prices have surged more than 140 percent in the past 15 years, propelling Sydney past London and New York to rank as the world’s second-most expensive housing market. Melbourne, ranked the world’s most livable city the past seven years by the Economist Intelligence Unit, is now the planet’s sixth-most expensive place to buy a house.

In response, home ownership among the young has plunged: only 45 percent of 25-to-34 year-olds own their own home, down 16 percentage points from the 1980s, with almost half the decline coming in the past decade. At the same time, hefty mortgages have pushed household debt to a record, acting as a drag on the economy’s 26 years of unbroken growth. As more people retire still owing a mortgage, or renting, they are more likely to qualify for government welfare, undermining the A$2.3 trillion ($1.8 trillion) pension savings system.

“The great Australian dream of home ownership is becoming a nightmare,’’ said Brendan Coates, a housing policy expert at the Grattan Institute. “It’s down to a collective failure of government policy that will take at least two decades to fix.” 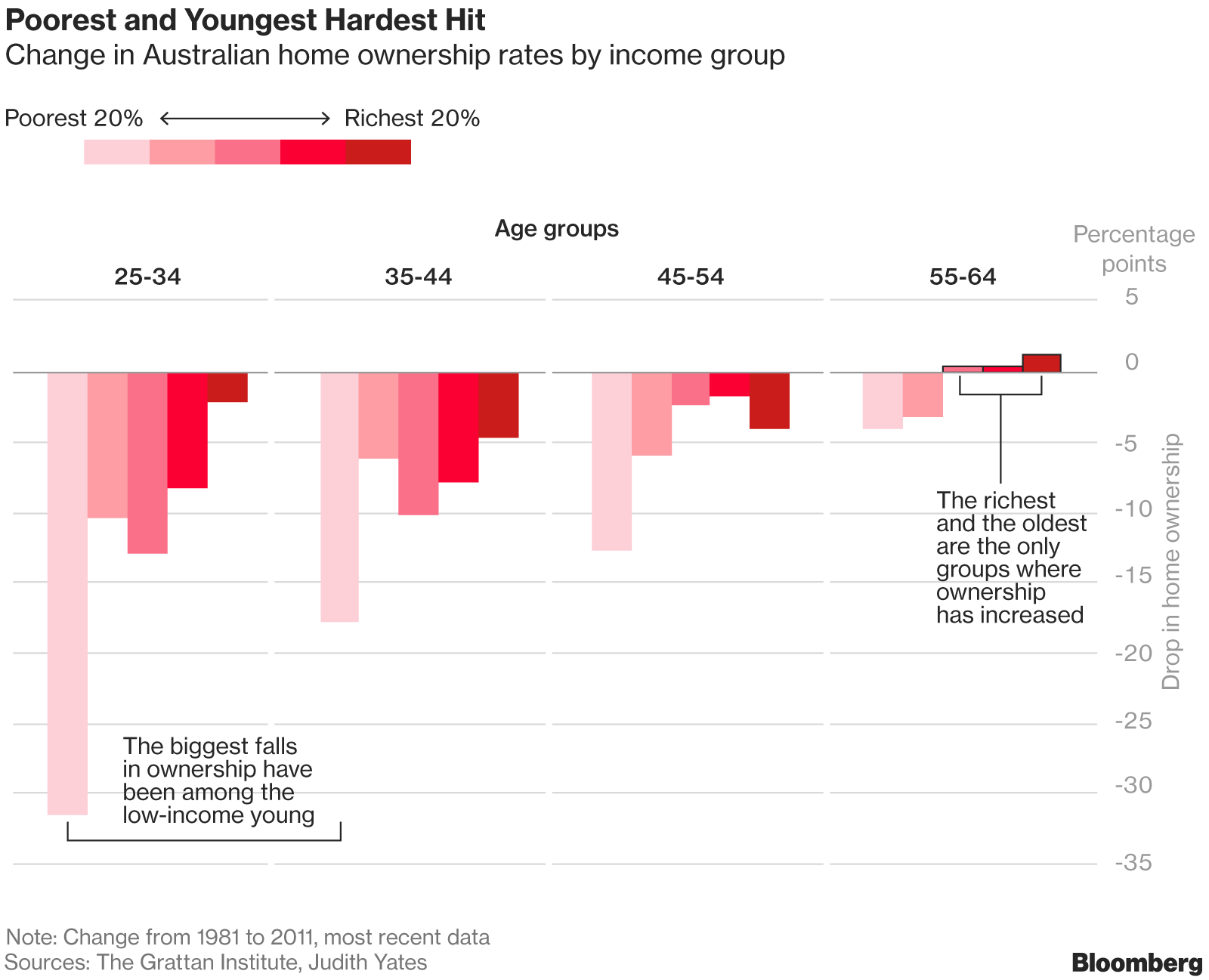 Voter angst over housing affordability is mounting: almost 90 percent of Australians fear future generations won’t be able to buy a home, according to an Australian National University survey. Failure to address the issue is heaping pressure on a government already under fire for the botched rollout of a A$49 billion national high-speed internet network, and energy-policy bungling that’s sent power bills soaring and triggered fears of blackouts this summer.

One of the biggest flashpoints are tax incentives that have turned housing into a speculative financial asset. First-home buyers complain they can’t compete against investors, who through a perk known as negative gearing can claim the costs of owning a property-for-rent -- including mortgage interest -- as a tax deduction against other income. The allure of property investment was turbocharged in 1999, when capital gains tax was halved. With housing prices seen as a one-way bet, investors piled in. 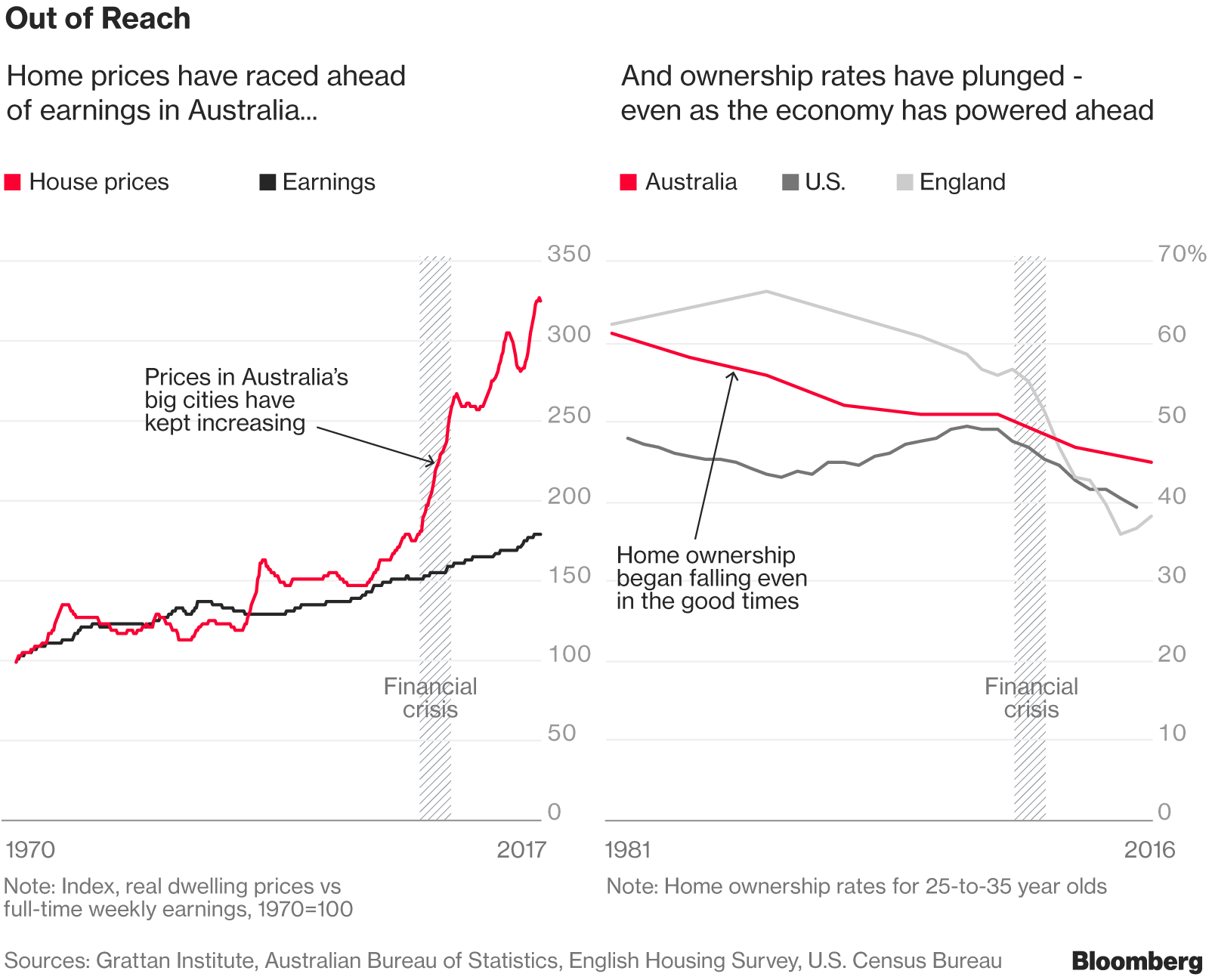 More than 2 million, or one-in-12, Australians own an investment property, with almost 30 percent of those owning two or more. 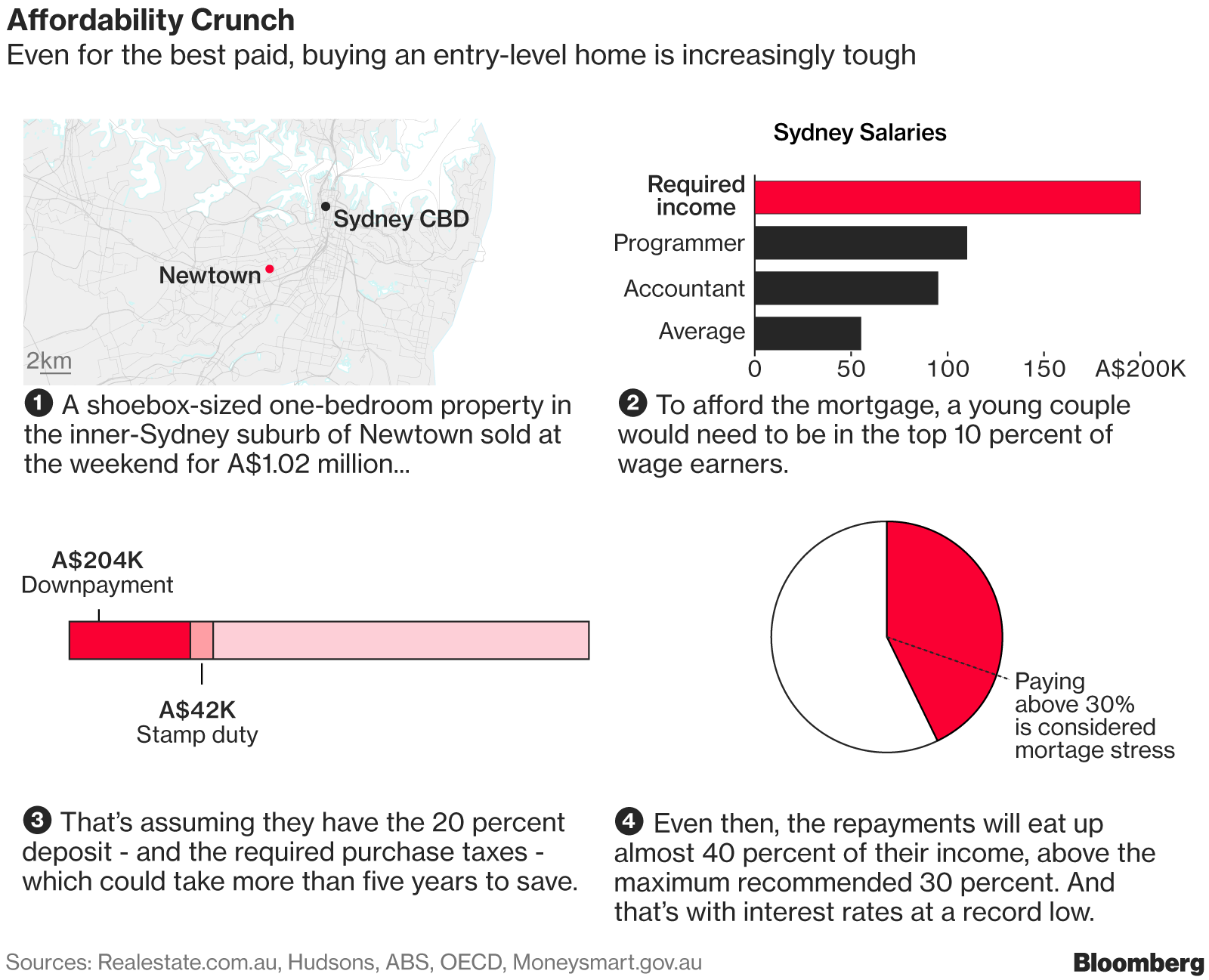 As the average price of a Sydney home sailed past A$1 million, housing affordability fell victim to the hyper-partisanship that has gripped Canberra over the past decade and paralyzed policy making. During last year’s election campaign, when the opposition Labor party proposed changes to limit negative gearing to newly-built houses and reduce the capital gains tax discount, Prime Minister Malcolm Turnbull retaliated by ruling out any changes and launched an assault claiming Labor’s move would “take a sledgehammer” to the property market and “punish” mum and dad investors.

A package of measures in the May budget aimed at improving housing affordability only tinkered at the edges -- targeting overseas investors who leave properties vacant and offering tax breaks for people saving for a deposit on their first home. State governments have also done little to address the issue, relying on policies such as stamp duty discounts or grants to first-home buyers that just act to push prices up even further.

“There’s no way we can fully put the genie back in the bottle,” Coates said. “Pretty much anyone under the age of 35 you’re going to find it pretty hard” to buy a home unless they are a high-income earner, he said.

Politicians, meantime, have offered only superficial solutions. Former Treasurer Joe Hockey said buyers struggling to get into the market should simply “get a good job that pays good money.” Deputy Prime Minister Barnaby Joyce said people priced out of Sydney should have the “gumption’’ to move to rural areas like Charleville in outback Queensland -- where houses are about one-sixth the price of Sydney, but youth unemployment in the region is the highest in the nation.

“What politicians have offered so far are band-aid solutions that might be popular in the short-term but will be ineffective in the long-run” said Judith Yates, who has advised the government on housing policy and is an honorary associate professor at the University of Sydney. “There hasn’t been a serious attempt to tackle the fundamental causes of declining affordability.”