Ten years ago, there were only five Melbourne suburbs that had a median house price of $1 million. Now there are 121, which have enveloped most of the inner city, Domain Group data shows.

This map shows how much of Melbourne is now taken up by suburbs with this hefty asking price.

As of June this year, more than 100 suburbs formed a solid bloc that expands out from the inner city, stretching as far north as Rosanna and as far south as Beaumaris.

Abbotsford, Burnley, Brunswick, Clayton, Collingwood, Highett and Glen Huntly are among the areas that have turned red in the past year.

But if you watch how the ranks of the million-dollar club have grown over time, many of the recently-minted members have been eastern suburbs.

The furthest east the band of million-dollar suburbs reached in 2014 was Mont Albert, about 15 kilometres from the CBD. Glen Waverley and Mount Waverley join the following year. In 2016, the median house price is Box Hill, Blackburn and Chadstone reached $1 million.

The only spots of blue left in the inner city are the CBD, Docklands and Southbank. That’s largely a reflection of the fact the data used to create the map was house prices, and residential stock in these areas is mostly apartment blocks.

There are also two small blue shapes just south of the city if you squint closely at the map. These are Ripponlea and Gardenvale, but because these suburbs are so small, there have not been enough house sales in them this year to produce an accurate median. Both areas have recorded medians of above $1 million in the past, though.

This map shows the suburbs with a current median house price of $1 million in red. Click or hover over a suburb to see its name and current median.

But there is one thing to keep in mind when you look at this map. It does not account for inflation, so $1 million is not as large a sum as it was 10 years ago.

Outside of the main bloc of suburbs, there are some pricey isolated pockets such as Williamstown to the west, Plenty to the north and Waterways to the south.

“It’s quicker to get to the city from Essendon than from the other side of town,” he said.

He tipped Yarraville as the next suburb in the inner-west to see its median house prices rise above the million mark.

The graphic also shows how the number of suburbs in the club has fluctuated. The club contracted following the global financial crisis and again in 2012. But since then its numbers have swelled each consecutive year. 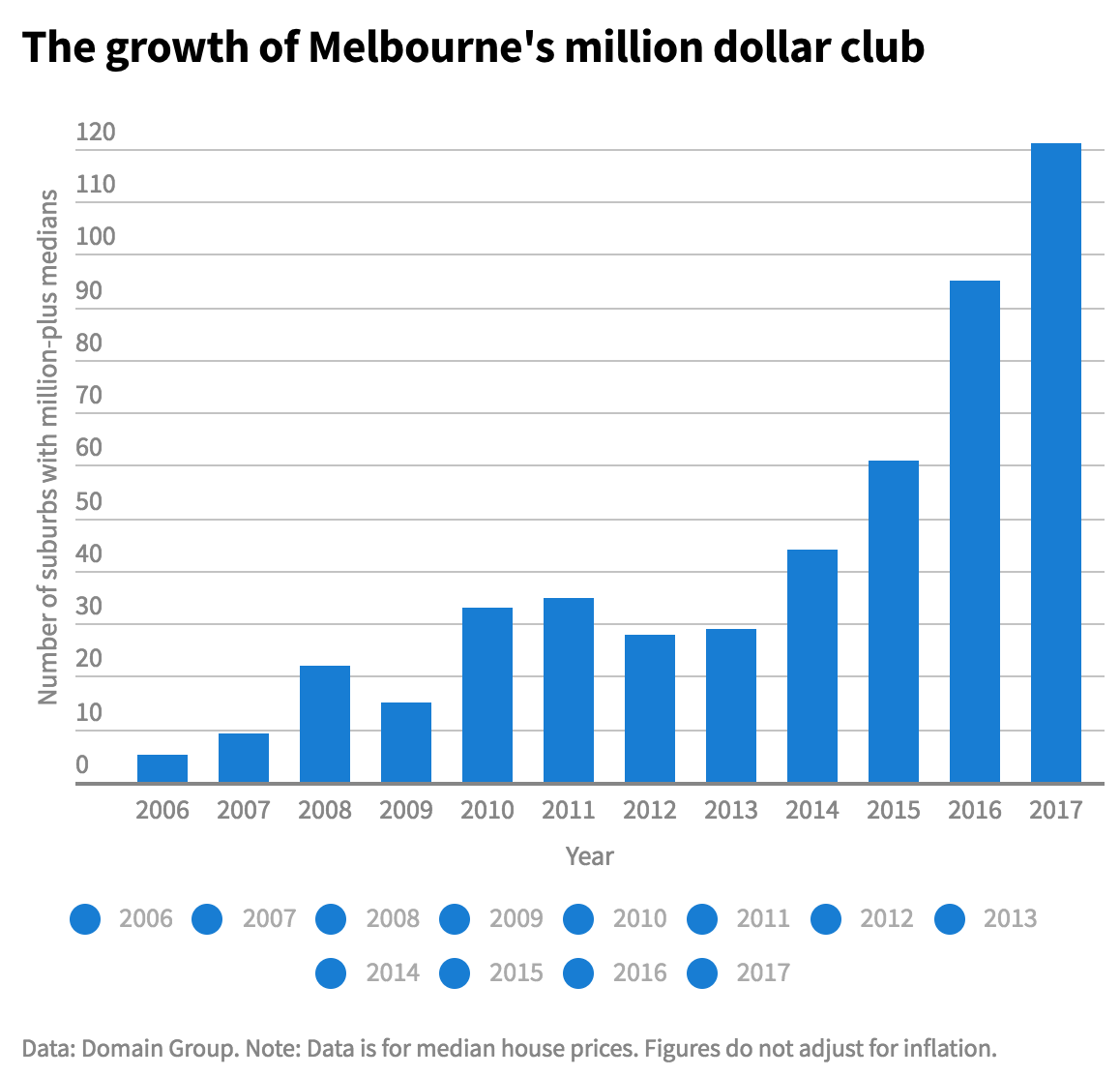 Hawthorn East has had the most turbulent time. It joined in 2008 with a median of $1.1 million, but was kicked out the following year when average house prices dipped to $950k.

The suburb now has a median house price of $1.8 million and may well be considering its chances of entering the even more elite $2 million club.

Toorak was the founding member of this clan – its median house price was $2.3 million as far back as 2007.