Property in Melbourne's inner bayside suburbs is worth more per square metre than the city's most famous blue-ribbon suburbs like Toorak and Armadale, according to the Real Estate Institute of Victoria (REIV).

REIV data has revealed buyers paid more for space in Albert Park than any other suburb across metropolitan Melbourne, at $12,947 per square metre.

It was followed by the nearby suburbs of Middle Park and South Melbourne. 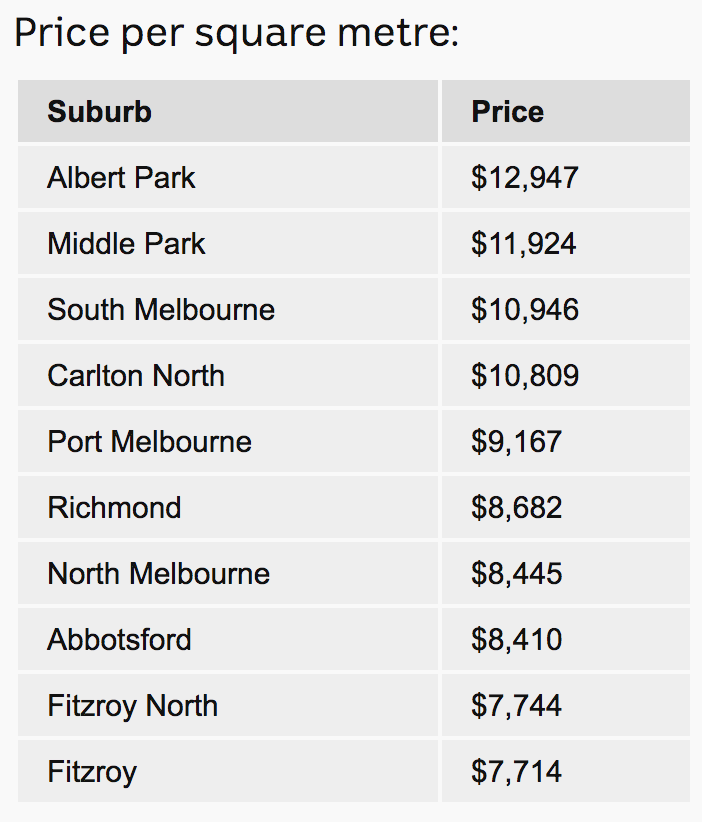 Leafy Albert Park is home to the Australian Grand Prix and is near popular nightspots St Kilda, South Yarra and Prahran.

Despite having Melbourne's highest median house price at $4.75 million, Toorak did not make the top 10 on a per square metre measure. Nor did other traditionally expensive areas like Brighton, Armadale and Malvern.

Carlton North was the most expensive suburb north of the Yarra, coming in fourth at $10,809 per square metre.

It seems Melburnians value ocean views, with the bayside dominating prices per square metre for middle and outer suburbs.

REIV President Joseph Walton said he was surprised at the results.

"I guess what it points to is the nature of the offerings in those particular areas, so Toorak is known for its large palatial homes on typically large land blocks," he said.

"The areas that have scored well, like Albert Park, Middle Park, and in particular South Melbourne, are areas where the typical land size allotment is smaller.

"Some of them are areas where they were originally established for the working class, so the dwelling size and quality, given the nature of their original design, was a lot smaller."

In recent decades, inner-city working-class areas like South Melbourne and Fitzroy have transformed into Melbourne's cosmopolitan hubs, pushing up prices.

Mr Walton said buyers were prepared to sacrifice size to be near popular shops and hip restaurants and bars.

"Quality infrastructure, strong retail amenity and close proximity to the CBD are critical factors that drive growth in those areas," Mr Walton said.

He said house prices in Melbourne's inner ring had risen 20 per cent in the past 12 months, with a booming market pushing Melbourne's overall median house price to record highs.

The number of million-dollar suburbs has also quadrupled in just five years, according to the REIV.

That trend over the past decades has led to a drop in home ownership in Victoria, and an increase in rental stress.

Another factor was those downsizing from "family" bayside areas like Brighton, Hampton and Black Rock to smaller properties to suit their changing lifestyle.

This article was originally published by Stephanie Chalkley-Rhoden on the 10th Aug 2017 via abc.net.au