Behold the urban mass that is Melbourne — the greatest city on the Australian continent in the 21st century.

The last of the mainland state capitals — settled in 1836 — ­Melbourne stalked then usurped Sydney as Australia’s biggest city in the gold rush inspired 1850s.

By Federation both cities were about the same size: half a million people each. But by the end of the 20th century it was Sydney that had opened up a lead of 600,000.

Melbourne’s strength was always as a manufacturing and union heartland; Sydney on the other hand commandeered the century’s “new” industries of ­financial services and media.

However, thus far in the 21st century Melbourne has overturned 100 years of demographic history to regain the initiative. 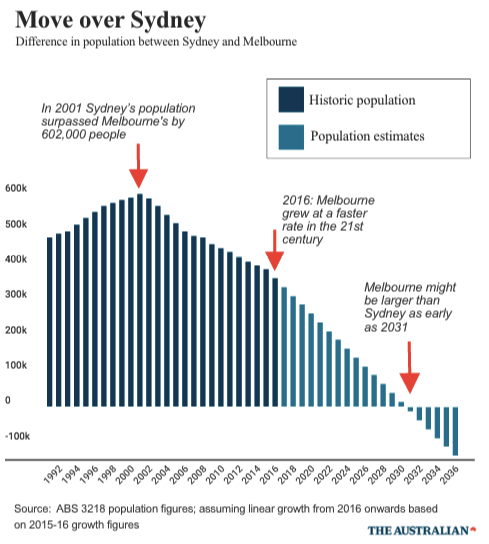 Sydney faltered after the 2000 Olympics: perhaps hubris brought on by the global spotlight; perhaps a reverberation of poor planning in the previous decade when the city was declared “full”.

Either way, Sydney’s lead is now closer to 350,000 but is narrowing at a rate of 20,000 a year. If present rates were to continue Melbourne would replace Sydney as Australia’s largest city at some point in the 2030s.

Why is Melbourne attracting more growth than Sydney? Melbourne offers what Sydney cannot or will not offer: access to affordable housing on the urban fringe. Melbourne planned for growth from the Kennett years resulting in the formation of a plan for five million residents at 2030 and announced in 2002. 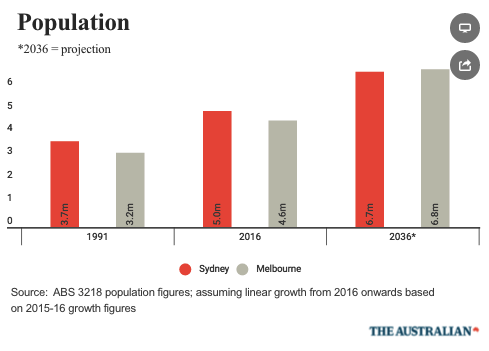 Melbourne will pass the five-million mark around 2021. This bold plan opened up the city’s west to new development less than 40km from the CBD in ­places such as Caroline Springs and Tarneit. It was the beginning of Melbourne’s transformation.

Within a decade the Gold Coast was usurped by Melbourne’s western front of Wyndham and Melton as the nation’s fastest growing region, adding about 20,000 residents a year.

Two policy ideas — Melbourne at 2030 and Sydney’s “full” — changed the long-term fortunes of both cities. Figures released by the Australian Bureau of Statistics in March showed something remarkable. In the year to June 2016 Melbourne added 108,000 residents. Sydney added 83,000. In 180 years of Melbourne’s history, never has the city added such a number. The meaner, the tougher, the more outrageous the cost of housing in Sydney, the better Melbourne looks.

And especially on the edges where the price for a house and land package can start with the number three. Sydney’s more distant equivalent starts with a five.

The maps of Melbourne’s east and west show the secret to the city’s success. Melbourne’s burgeoning west is filling the gaps inside the urban growth boundary between Werribee and Deer Park and further west to Melton, less than 40km from the CBD.

New estates on the city’s eastern side are also filling the breach around Cranbourne and Officer close to 50km from the CBD.

Last financial year the Melton-Wyndham coagulation added 18,000 residents; the Casey-­Cardinia corridor added 17,000. About a third of Melbourne’s growth is delivered into these two new urban-edge creations of the 21st century.

By the early 2050s Melbourne will contain eight million residents. Based on official pro­jections to 2031 combined with our own calculations Melton-Wyndham will add 660,000 ­residents and Casey-Cardinia will add 500,000 over the 35 years from 2016. 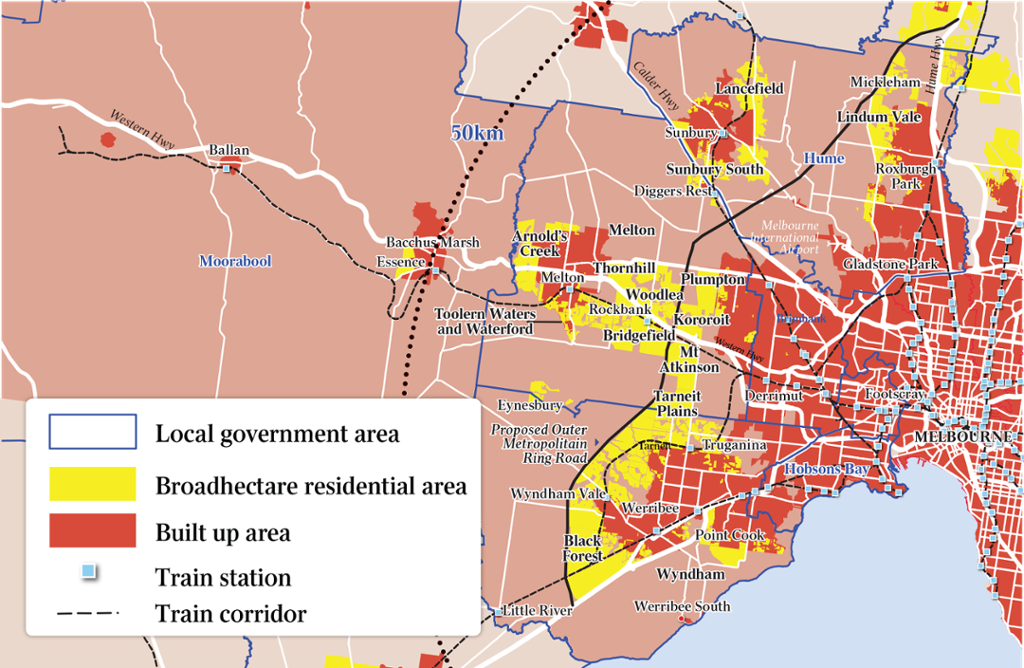 The west side alone will support 330,000 net extra workers by 2050 or roughly double today’s resident workforce. The planned western distributor project will not be sufficient to accommodate long-term demand for west-based workers to access CBD-based jobs.

A new river crossing will be ­required during the 2030s. I think the solution is to immediately begin creating a Parramatta-type suburban job centre in Footscray to obviate the need to cross the Maribyrnong and the Yarra.

On the east side no amount of widening the Monash Arterial will be sufficient to accommodate an extra 250,000 Casey-Cardinia workers trying to get to “city” jobs.

Business hubs must evolve at intervals along Melbourne’s great eastern corridors at, say, Box Hill and perhaps Ringwood on the Maroondah Highway and at ­Monash-Chadstone and perhaps Dandenong on the Princes Highway. Jobs must decentralise in a Melbourne at eight million.

But there is more to this than boring population projections. The urban growth boundary shows westside growth pressing further west from Werribee and Tarneit to the proposed outer metropolitan ring road.

At some point in the 2030s when this road is completed planners will argue that it is inefficient to leverage urban growth off one side of an expensive motorway.

Such logic would see the urban growth boundary pushed west of the ring road towards Eynesbury.

For 150 years Melbourne pushed east into the soft alluvial soils of the foothills of the Dandenong Ranges before deflecting southeast through Cranbourne and Berwick towards Pakenham. But the city has reached its ­commutable limits at Pakenham, 55km from the CBD.

The big-picture rethink of Melbourne that took place in the 1990s (and that Sydney never ­responded to) has in a single ­generation flipped the city’s growth focus from the east to ­include the west.

The east is still important but it is the west that is transforming the city. Melbourne delivers the ­Australian dream of an affordable house on a separate block of land.

Melbourne at eight million will be a city spanning 100km between Melton and Pakenham with mini-me CBDs dotted strateg­ically along urban corridors or pressed hard up against natural barriers as Footscray is to the ­Maribyrnong River.

Interestingly, Melbourne by 2050 will not be dissimilar to Los Angeles today (population 13 ­million) in terms of the scale of its urban canvas, which stretches 120km between San Bernardino and Santa Monica.

However the urban fabric of LA is denser now than Melbourne will be by mid-century and which suggests that there is scope to dense up Australia’s middle suburbia. LA also has strong mini-me CBDs scattered across the urban canvas in places such as San Bernardino in “The Valley” and at Anaheim and Irvine in Orange County. Even with a generous freeway network, a western car-based city stretched across 100km-plus naturally breaks down into relatable regions.

Perhaps a better benchmark for Melbourne at eight million isn’t LA but the dual city of Dallas-Fort Worth, where the two hubs are separated by 50km of freeway. The DFW canvas also stretches 100km and it contains two of America’s leading growth areas, Collin and Denton counties, which offer growth comparable to the edges of Melbourne.

DFW contained 7.2 million residents in 2016, up 143,000 over the previous 12 months. DFW works well because it sprawls across an open plain and offers well-separated CBDs enabling house-and-land packages to be offered within commutable distance of a job hub.

Sydney might have more corporate head offices than Melbourne, just as New York might offer more corporate head offices than DFW. But the housing and jobseeker market most readily gravitates to cities that deliver housing affordability combined with access to a capital city job market. And that is precisely what Melbourne is doing better than Sydney in the 21st century.

This article was originally published by BERNARD SALT on the 25 May 2017 via theaustralian.com.au

Bernard Salt is a KPMG partner and an adjunct professor at Curtin University Business School. Mapping by Cody Phelan and research by Simon Kuestenmacher.