Melbourne suburbs where it’s cheaper to buy than rent

SMALL units in a host of Melbourne suburbs are cheaper to buy than rent, making them ideal targets for first-home buyers, new data reveals.

Realestate.com.au research shows it would cost $2516 less annually to pay off the average mortgage for a two-bedroom unit in Travancore than it would to rent one.

It’s a similar story in Albion, where buyers of two-bedroom units are $2463 better off yearly than renters.

This property type is ultimately also cheaper to buy than rent in Melton, Melton South, Notting Hill and the CBD, according to realestate.com.au.

Three-bedrooms units in Wallan and Melton South also fit this category, along with two-bedroom houses in Roxburgh Park.

Realestate.com.au compared the monthly loan repayments needed on a median-priced home to the suburb’s average monthly rent to calculate the data.

The repayment figure was based on the buyer having paid a 20 per cent deposit and signed up for a 30-year mortgage with a 5.25 per cent interest rate

According to realestate.com.au, buyers currently only pay an extra $6.15 per month on monthly loan repayments compared to monthly rent for two-bedroom units in Broadmeadows, making this property type another solid proposition for househunters.

Buyers also needed to shell out only a little bit more a month than renters for three-bedroom units in Meadow Heights and Melton, $7.94 and $20.97 respectively, and two-bedroom units in Bacchus Marsh and Sydenham, $21.92 and $26.97.

Realestate.com.au chief economist Nerida Conisbee said these were the types of properties first-home buyers should have in their sights, as once they’d overcome the challenge of saving a deposit, the repayments should be achievable.

She said a mix of affordable median prices, new unit development and a lack of investors, and therefore rental properties, had made these areas better prospects for buying than leasing.

The benefits of owning property including earning equity, making it “easy to upgrade down the track”, enforced saving to meet repayments, and not having to answer to a landlord, Ms Conisbee said.

“People do like to have control of their home and be able to improve it,” she said.

He said there had been fewer units built in the area in the past year, decreasing the available rental stock and pushing up prices.

MAKE YOUR MONEY WORK FOR YOU 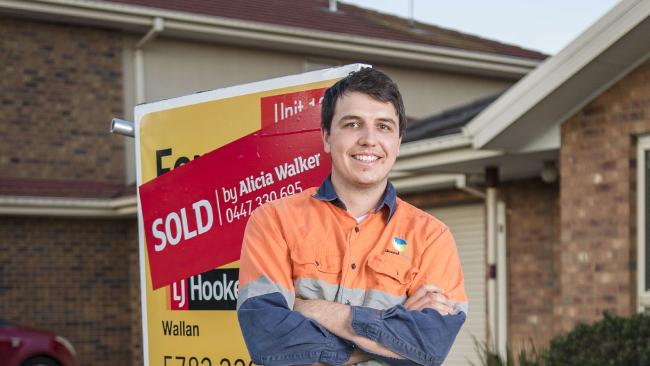 FOR first-home buyer Chris Connelly, buying a two-bedroom unit in Wallan made more financial sense than wasting money on rent.

Working in Thomastown, he wanted to buy something close to work and has spent most of the year looking, while saving by living at his parents’ house in Pakenham.

Mr Connelly said his friends rented in Thomastown, with one spending $390 a week on rent and another $290 — money he figured was better spent on his own mortgage.

“I would have preferred a house but it wasn’t in my budget.

“I was tossing up between this or an apartment in Preston, but it was a tiny one-bedroom apartment and I thought as a future investment it wouldn’t do as well as a spacious two-bedroom unit in Wallan, which is expected to get some decent growth in the next couple of years.”

Mr Connelly bought 12/76 Windham St about two weeks ago for $305,000 and said he would live there for a year and then potentially rent it out.

His advised other first-home buyers trying to get on to the property ladder to start saving as early as they could.

“Maybe don’t look for your forever home straight away but get into a house you can live with.

“I would like to live closer to Thomastown but it is really expensive there.”