If the television series Friends was made today, Joey and Chandler wouldn’t be there – their New York apartment would be permanently rented on Airbnb.

“And Rachel wouldn’t be there either,” says Murray Cox, “because Monica would have seen how much money they were making next door and listed her room too.”

He’s joking, but New York-based Australian Cox is serious about Airbnb, to the point that he is probably the online holiday letting agency’s global public enemy No.1. 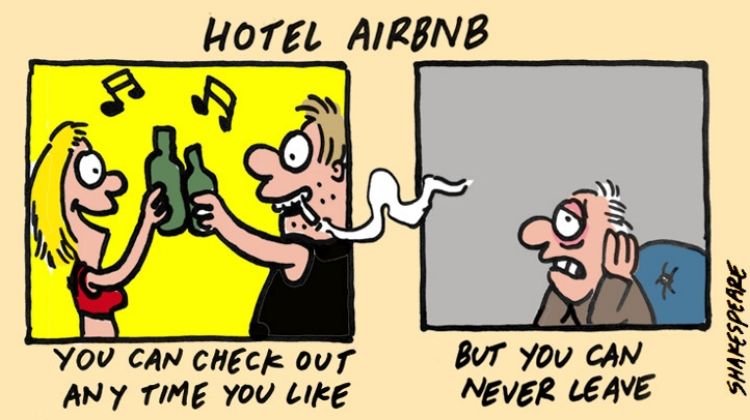 More than a third of Airbnb “hosts” reportedly have more than one property.

His website InsideAirbnb.com analyses the $A50 billion company’s own publicly available information to show how many beds, rooms and whole homes are available in the world’s cities.

Despite his home city of Sydney being the happiest of hunting grounds for Airbnb, InsideAirbnb.com was started when Cox was analysing the gentrification of his local neighbourhood, a predominantly black area of New York’s Brooklyn.

“Airbnb was telling us that they were putting money into the pockets of ordinary black people but I discovered that, while there was an increase in holiday rentals in the area, the owners benefiting from it were predominantly white, while the people being displaced were mostly black.”

Further analysis led to the creation of an InsideAirbnb website just for New York which was launched with the press of a laptop key while Cox was on holiday in the NSW Blue Mountains.

Now 44, Cox studied computer science, pure mathematics and psychology at Sydney University from 1990 to 1993. He lived in Castle Hill, Leichhardt, Darlinghurst and Surry Hills, and worked in computing including helping to devise the ATO’s e-tax system while studying photography on the side.

Eight years ago he moved to New York and now works in the Big Apple as a documentary photographer and “Chief Data Activist” of InsideAirbnb.com.

His website now covers every part of the world where Airbnb is active.

Most importantly, it is data-rich. If you go to InsideAirbnb.com/Sydney you get a colour-coded map of the greater Sydney area showing where all the rooms and whole homes are available for let – all 26,500 of them, most concentrated to the east of a line from Palm Beach to Hurstville.

Using information freely available from Airbnb’s listings it reveals the percentage that are whole homes (61.9 per cent), the number of nights they are rented per year, the difference Airbnb hosts make in weekly rent compared to residential lets and so on.

An animated graphic run on the Fairfax Media story “Airbnb Taking Over Sydney One Beach At A Time” was based on information provided byInsideAirbnb.com. It shows how quickly Airbnb is growing, and how concentrated its activity is.

But how accurate are his figures? Airbnb say not very, telling us that by their reckoning 51 per cent of their listings are whole homes and 49 per cent rooms where the host is there.

“The vast majority of our hosts are everyday people who have just one listing and share the space a few nights a month to help make ends meet,” says Dylan Smith, Airbnb’s head of communications for Australia and New Zealand. “Airbnb is an open people-to-people platform where listings come on and go off throughout the year.”

The problem is that the picture is, by its very nature, confused. Does a whole-home listing mean that house or flat is available all year or just while the owners or tenants are on holiday themselves?

Does a host with multiple properties listed mean they have several units across the city or several rooms in one house?

Cox says these are the grey areas that allow Airbnb to fudge figures and underplay the impact of their business on residential communities. The “everyday people making ends meet” line is certainly a mantra repeated in myriad languages around the world whenever Airbnb is challenged.

But it is exactly ordinary people that are Cox’s main concern. He is more concerned about the displacement of more vulnerable members of the community than he is about the holiday letting of whole homes.

“Many people think it’s OK for owners to share by renting a room in their homes,” says Cox. “However a lot of people who might have had roomies or lodgers are now looking at letting that spare room on Airbnb because they can make double the money.

“But what happens to those people who now can’t afford to rent those rooms in popular areas? They get pushed out to the fringes and then they are having to spend more time and money on travel to get to where the jobs are.

“Meanwhile our cities are losing all the ‘ordinary people’ that Airbnb claims to be helping.”

In addition, he says investors are encouraged to buy property as they know they’ll have an income from Airbnb customers, which forces prices up for first home buyers, and makes homes ever more unaffordable.

“Housing shouldn’t be regarded as a commodity and a way of maximising income,” he argues. “Residential housing should provide a social function.”

“Airbnb says it’s living like a local,” he says. “But how do you know that when it’s displacing the locals?”

While InsideAirbnb.com has become the go-to resource for journalists, activists and and state and local governments, Cox claims Airbnb’s marketing deliberately blurs the issues and buries the facts.

He is not alone. Last month Airbnb abandoned legal action against the City and State of New York and lost a major court case in San Francisco. Berlin has banned holiday letting in residential apartments, Barcelona has fined them twice for breaching tourism laws, Amsterdam has imposed a whole-home limit of 60 nights per year and Vienna has demand Airbnb hosts pay tourist tax. Even Queenstown in New Zealand is getting in on the act, raising council rates by 25 per cent for 800 holiday letting hosts.

On a much larger scale, in London just last month, Airbnb agreed to restrict listings to 90 nights per year if the properties don’t have planning permission, at an estimated potential cost of $500 million a year in lost revenue.

The agreement to remove listings that don’t comply with local laws, there and in Amsterdam, is a massive breakthrough. Previously they insisted the issue of legality was between the host and the local authority.

In Sydney, they cling to that hands-off approach, happy to wait for proposed regulation that will, it seems, de-regulate holiday lets in apartments.

But the free-for-all is not a given. The upper house of the Victorian Parliament recently rejected legislation that would have opened Melbourne’s apartment blocks to unlimited short-stay letting.

And the opposition to removing the legal right of Sydney apartment blocks to restrict holiday lets is growing apace.

Meanwhile, Airbnb is cranking up its corporate pitch. Sydney Opera House has entered into a partnership to run tours for frequent Airbnb hosts, while Qantas is offering frequent flyer points to Airbnb guests.

The choice of iconic Australian brands to partner with does not surprise Cox who says too many people believe Airbnb is merely competing against hotels and serviced apartments.

However, while his criticisms are scathing, Airbnb has shied away from directly confronting him.

“Airbnb have never threatened to sue me – they just tell people my figures are inaccurate and unreliable,” says Cox.

“But their message is always about ordinary people sharing their homes, and we know that’s not where they make most of their money. So you have to wonder whose figures are truly reliable and whose aren’t.”

This article was originally published by Jimmy Thomson on 21 Jan 2017 via domain.com.au