In an effort to tackle the problem of housing affordability "head on", the Victorian Government is rezoning 100,000 housing blocks and creating 17 new suburbs in Melbourne's key growth zones.

The State Government said the announcement was one of a suite of policies it would unveil this week to help people trying to get into the property market.

The blocks will go on the market between now and the end of next year in areas including Kalkallo, about 50 kilometres north of Melbourne's CBD, where a community of up to 40,000 will be established at Cloverton over the next 30 years.

All of the communities will be fully planned with access to town centres, schools and key infrastructure available when people move in, the State Government said.

Treasurer Tim Pallas said housing blocks are much more affordable in Melbourne than Sydney and he wants to keep it that way.

"We're getting on and delivering the policies that will assure Victorians, certainly so far as the supply debate is concerned, that is the amount of housing stock that is available into the market," Mr Pallas said. 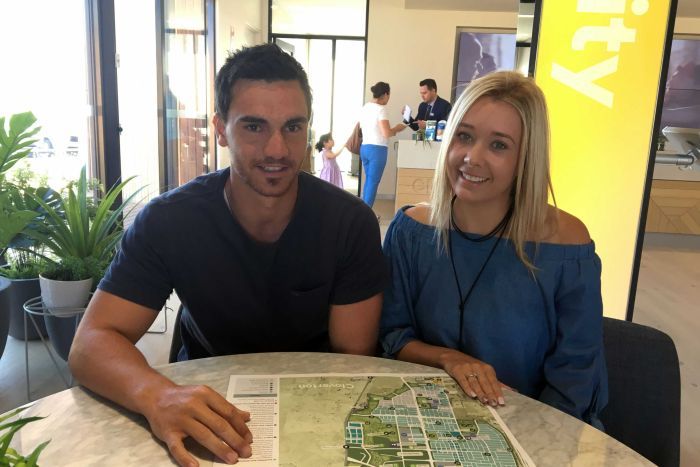 Melissa Kolbe and Daniel Makertich bought land at Kalkallo and plan to start building in May.

The couple, who are from nearby Craigieburn, are not worried about being a long way out of Melbourne.

"I think it's more the location, [we're] close to our family and friends," Ms Kolbe said of the reasons for their decision.

"Transport, knowing there will be a future train station linking up to Donnybrook and also [we're] close to the Hume Highway, [so we've got] great access.

"You're not too far out but still everything in one community."

Mr Makertich said the affordability of a large-sized block made the decision to buy there easy.

"The masterplan sold us. Having eight schools planned in the area, sporting facilities, that definitely helped us make the decision," he said.

Mr Pallas said the Government's spending on infrastructure had increased from a ten year average of $4.9 billion a year to $8.4 billion dollars and was getting larger.

"What does that translate to? Here in the northern suburbs [that] translates to a Mernda rail line, [and] an outer suburban arterial road program of $1.8 billion for western suburbs of Melbourne," he said.

"In the very near future we'll be unveiling comparable packages for the northern suburbs and south-eastern suburbs of metropolitan Melbourne in those growth areas."

Too little too late, Opposition says

Opposition Leader Matthew Guy said rezoning was overdue and the wait had been too long for hopeful home buyers.

"This is too little too late … for those people struggling to buy a house, this land should have come on stream two years ago," he said.

"It beggars belief that it's taken the Government so long."

Mr Guy also said he was concerned that the new residential developments would be built without proper infrastructure.

"I worry that this Government has scrapped the works in kind scheme, which saw infrastructure coming on place at the time of development and as a consequence … we might see many suburbs built without proper infrastructure."

This article was originally published via abc.net.au on the 28th Feb 2017.