The Victorian Government's release of 100,000 new housing lots in Melbourne will do nothing for the city's housing affordability problems, urban planning and industry experts say.

Under the plan, housing blocks will be rezoned and 17 new suburbs will be created in key growth zones in the outer north, north-west and south-east in a bid to make buying a home more affordable.

"Pure supply-based affordability is not working to bring down housing prices for most families," she said.

"I don't expect it to have any impact on housing prices."

Sam Lally from Buyers Advocate Australia said the announcement would be welcomed by some homebuyers.

"It's great for first-home buyers entering into the market, obviously allowing more useable land in the district to get more buyers with their foot on the property ladder," he said.

However, he predicted it would not have a big impact on the main problem area for housing affordability in Melbourne — the inner-city market.

"The reason why we're finding a lot of house prices are unaffordable in the Melbourne market is mainly due to supply and demand," he said.

"There's a lot more demand out there for the inner-city markets for established property than there are for off the plan and house and land packages."

He said the new blocks would add to the affordable supply of homes on the city's fringes.

"There are other areas outside of Melbourne with established homes that are affordable in comparison to the inner-city markets like your Doreens, your Meltons, your Sunburys — those type of areas that are already established." 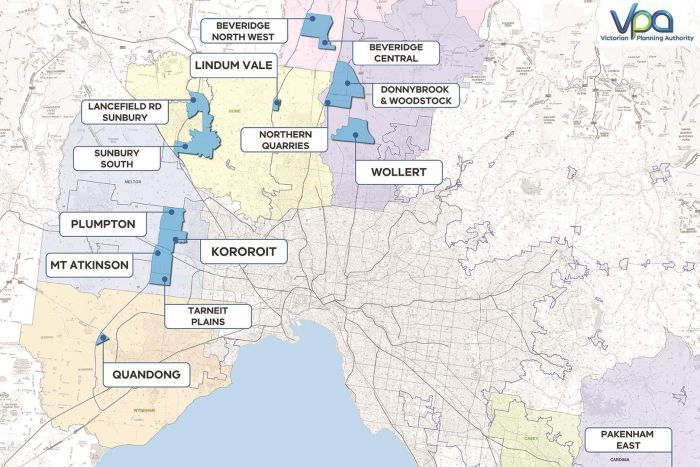 PHOTO: New suburbs will be created after the rezoning of 100,000 housing blocks in Melbourne.
(Supplied: Victorian Planning Authority)

Alternative plan should build up, not out: expert

Professor Whitzman said expanding Melbourne's fringes was not the answer.

She believes there needs to be more housing in the inner city, where infrastructure already exists.

"There's been a number of studies that suggest that up to 500,000 new building lots could be developed within the current belt area of Melbourne," Professor Whitzman said.

"Greater Melbourne is quite low density in relation to other cities around the world."

This article was originally published by Peter Lusted via abc.net.au on the 1st March 2017.