The number of million-dollar suburbs in Melbourne has quadrupled in the past five years, and despite talks of a slowdown, property prices will likely rise further, the Real Estate Institute of Victoria (REIV) says.

Data from the REIV shows in the first three months of this year, 120 Melbourne suburbs recorded a median house price of $1 million or higher. 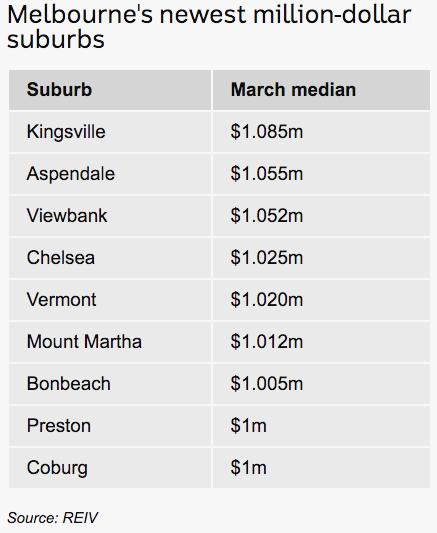 REIV president Joseph Walton said buyers priced out of inner suburbs were casting their eye out, buying up properties in the middle ring.

"The premium end of the market had traditionally been confined to the inner suburbs, however there's been a bridesmaid effect that's driving growth into the middle suburbs," Mr Walton said.

Property prices have been booming in Sydney, Melbourne and Brisbane, leading to concerns about housing affordability, particularly for first home buyers.

The NSW Government announced a number of measures to try and give first home buyers and edge over investors, which followed similar measures introduced by the Victorian Government, including stamp duty concessions.

There is much discussion about whether the property market is in the midst of a housing bubble about to burst.

Property analyst CoreLogic believes prices will slow down in the coming months, more in line with a correction, rather than a collapse.

"In terms of where Melbourne is going, the market is strong. There's been no substantive data that indicates there's going to be downfall," he said.

"The key growth drivers to Melbourne real estate are population growth, which continues to be particularly strong, migration into Melbourne is amongst the strongest in the country, a low-interest rate environment and low supply to the market place and very, very strong demand.

"So I think all of those things are going to drive the market in a positive direction."

Mr Walton said there may be a period of moderation over the next few months, but that's due to the seasonal slowdown in winter more than anything else. 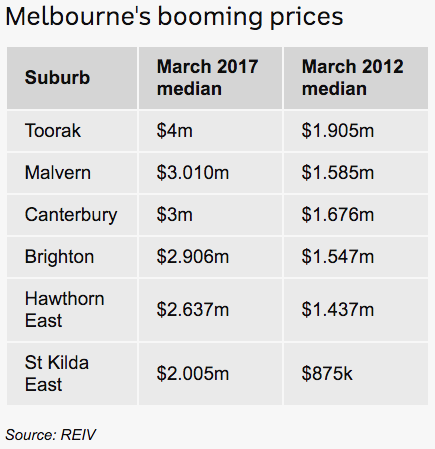 "Our prediction as far as the median house price in Melbourne is still positive over the next 12 to 18-month period.

"My message to first home buyers in particular is to show discretion in regards to the area they might look to buy property.

"I think there's a lot of wonderful opportunities in both the middle ring and outer ring suburbs, and that's where one's more likely to find an affordable property."

The REIV figures also revealed 20 per cent of suburbs within 10 kilometres of the city now have median of $2 million.

"Proximity to the city is a key factor, but suburbs that provide quality amenities and infrastructure such as strong arterial roads and public transport, facilities, in addition to retail amenities is leading the way in influencing buyers' decisions about outer and middle ring suburbs," Mr Walton said.

This article was originally published by Stephanie Chalkley-Rhoden on the 2 June 2017 via abc.net.au