Plans to sell off public housing land at nine sites across Melbourne to private developers have been opposed by six of the eight Melbourne councils where residents are affected.

Developers who succeed in buying a site off the government will have to rebuild the existing public housing – with at least 10 per cent additional dwellings for the poor.

This will lead to around 1100 more public housing apartments than there are now.

The government is midway through a similar project in Ashburton, where dilapidated walk-up public housing apartments have been demolished and the best part of the prime site is still to be sold off.

The public housing will be rebuilt on one corner of the site while private housing will take up most of the space that was once entirely dedicated to housing the disadvantaged.

Residents in private housing will get views of an adjoining river and golf course, while those in the public estate will be next to the street.

Across the nine sites targeted for redevelopment, there has been near unanimous concern from councils, in part because the government will hand decision-making powers for the land to Planning Minister Richard Wynne.

Public housing in Northcote, now (left) and as envisaged in the future.

The planning department will hold hearings on each public housing sell-off, starting with Flemington next month.

Rose Iser is one resident concerned about the Flemington plan, which will see 825 new private dwellings built on much of the open space between the existing 20-storey public housing towers.

Public housing in Flemington, now (left), and as envisaged in the future.

Ms Iser, who has made a submission to next month's planning hearing, said there were no clear benefits for tower residents, while the additional housing would bring extreme population densities.

"This financial model is putting the profits of developers above the needs of public housing tenants," she said.

Victorian Greens MPs have set up a parliamentary inquiry into the issue, supported by the Opposition and opposed by Labor.

Public housing also in Flemington, now (left), and as envisaged in the future.

He said the government would "encourage the Liberal and Green alliance trying to block the program to get out of the way and let us get on with the job of helping more Victorians in need".

In Northcote, the government intends to sell an estate on the banks of the Merri Creek to a developer – who will have to rebuild the existing housing for the poor, as well as at least 10 per cent more public dwellings.

In return, they will get the right to build private apartments as well.

But the Greens-dominated Darebin Council is waging war over the plan. Councillors argue the prime land should not be sold to build far more private housing when there are 35,000 people waiting for public housing.

Greens councillor Trent McCarthy, who is likely to seek the party's preselection for the state seat of Northcote in an upcoming byelection, was critical of the plan. "This is not a renewal program. It's a cunning attempt to sell off 80 per cent of public housing land to private developers."

Public housing in Brunswick West, now (left), and as envisaged in the future. 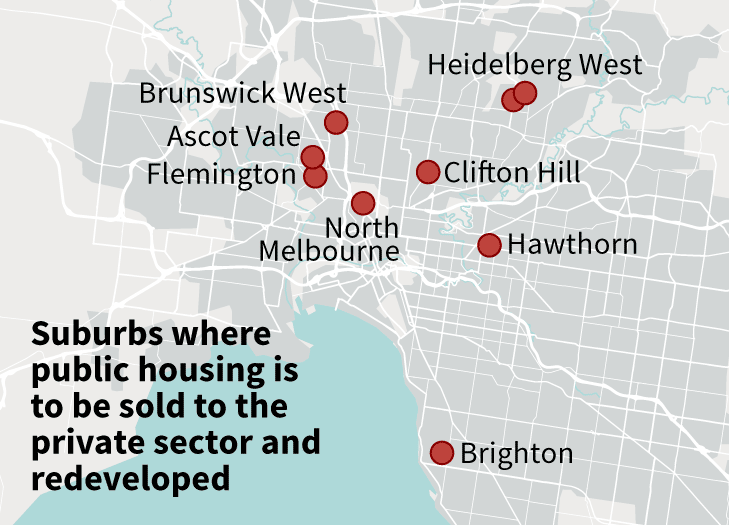 This article was originally published by Clay Lucas | 28 Aug 2017 | theage.com.au