Treasurer Scott Morrison has fuelled speculation the government may allow first homeowners to access their superannuation to break into the market after he said the cost of entering the housing market was causing couples to put off having children.

The Treasurer has also shrugged off fears that investors are stoking a dangerous property bubble, saying a lack of supply means galloping prices for houses in Sydney and Melbourne are "real" even if they're high.

With speculation rife in the retirement industry that the government was considering the super option as part of its housing affordability package, Mr Morrison said accessing low interest rates loans was not the problem for new homebuyers.

"The problem is being able to save quickly enough to get a deposit which is big enough to actually get yourself into the market," he said. 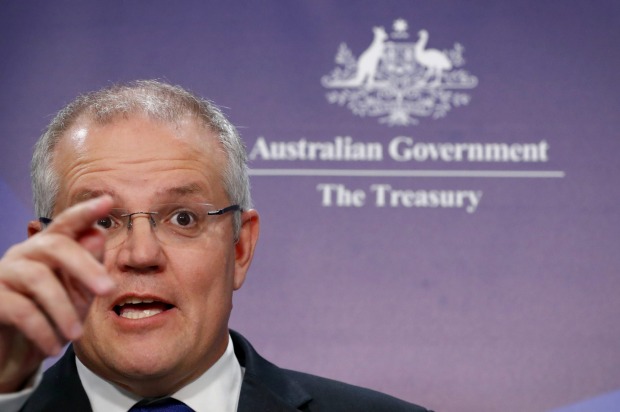 "In Australia our prices may be high, particularly in Sydney and Melbourne, but they're real," says Scott Morrison.
Alex Ellinghausen

"The ramifications of this run right through the community."

While the government will not confirm or deny most speculation ahead of the release of its housing package in the May 9 budget, the Treasurer did again knock on the head any changes to negative gearing, saying the argument any curbs would lower prices was "ridiculous". But he again made no mention of the capital gains tax concession for investors which the government is also looking at curbing but has made no final decision.

Under pressure to level the playing field for those competing against investors, Mr Morrison said regulators would need to ensure annual growth in bank lending to investors doesn't exceed their 10 per cent speed limit.

"Prudential regulators in these areas are always looking to ensure there are appropriate tensions in the cord," Mr Morrison said.

The Treasurer said the macro-prudential restraints that have been imposed on banks so far have had "a positive effect on managing this issue".

He said about 80 per cent of household debt is for mortgages.

"In Australia our prices may be high, particularly in Sydney and Melbourne, but they're real.

"The issue on housing affordability and prices in Australia is the mismatch between supply and demand.

"It's not the function of any sort of investor credit bubble or anything like this.

"They're real prices, they're real values, and what we're working as a government to do is put downward pressure on those rising prices by addressing the supply challenges that are out there and working with state governments to achieve that."

Mr Morrison also encouraged all states to follow the lead of South Australia and Victoria in imposing a "tax on latent stock", or so-called land banking in which an investment property sits vacant.

"If there's an investor holding property they're not leasing they would face a higher tax burden. We need all the stock that's out there to be on the market.

In ruling out changes to negative gearing in the budget Mr Morrison said the proposal that "you put up a tax and somehow you can buy a house anywhere you like, that's a lie".

He said people, if they chose to, should consider moving to regional cities like Tamworth where they could have a house and a better quality of life.

For this reason, he supports Nationals leader Barnaby Joyce forcibly relocating government agencies from Canberra to other regional cities.