Wealthy owner-occupiers will reignite the Sydney and Melbourne housing markets next year sending the two markets back to double-digit growth, according to leading analyst SQM Research's Louis Christopher.

Mr Christopher, who accurately predicated the boom in 2012 and this year's price rises, predicated in his latest Boom & Bust Report that house prices in Sydney could rise by 18 per cent and 17 per cent in Melbourne if the cash rate is cut by 0.25 per cent by the middle of next year.

Even if the Reserve Bank does not cut the cash rate any further, Sydney prices could still rise by 16 per cent and Melbourne by 15 per cent if the Australian economy remained unchanged.

No relief in sight for first home buyers 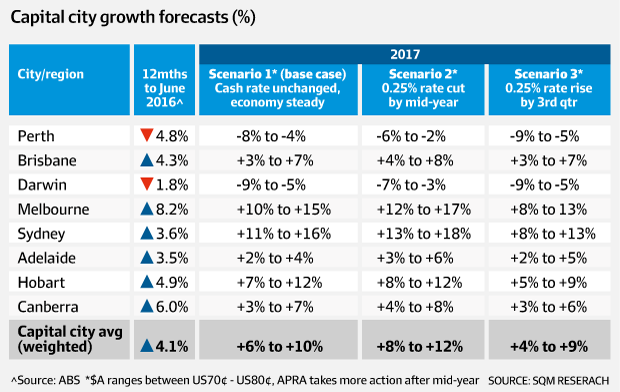 There would be no relief for first home buyers because the lower end of the predictions for the two cities would still be about 8 per cent.

While it was investors who charged up the markets with a 20 per cent growth in 2013 and and 2014, this time it would be home owners who would be responsible for the housing markets' second wind.

"In my opinion, the RBA will need the Australian Prudential Regulation Authority to rein in credit lending once again, or lift interest rates, or do both, and they need to take action sooner rather than later," Mr Christopher said.

While APRA had successfully doused investor activity after capping banks' investor lending at 10 per cent, owner-occupier lending was harder to slow down.

"Affluent areas tend to be driven by the prosperity of local economy. And right now, both Sydney and Melbourne have the fastest growing economies in the nation," he said.

"APRA's actions last year to rein in housing investment credit growth worked. [But] tapping on APRA's shoulders once again could be a little more complicated this time around as it will need to involve restricting owner-occupied credit growth – something which the banks will be more reluctant to mess with."

Brisbane and Hobart's house prices were also expected to rise to 8 per cent, and even Hobart would see a 12 per cent boom, assuming a rate cut.

Mr Christopher also forecast an oversupply of new homes in 2017 and 2018, the worse being Brisbane followed by Sydney and Melbourne.

Overall, the Australian housing market remained overvalued and should the cash rate rise to 2.5 per cent, there could be housing downturn, Mr Christopher warned.

"Serviceability is running at just above longer term averages. It's the only indicator right now that suggests there won't be an immediate downturn, unless servicing levels get beyond 10 per cent of incomes. What type of cash rate would it take to get to beyond 10 per cent? We calculate a cash rate of 2.5 per cent."