Sydney house prices increased 20% in a year, and Melbourne isn't far behind

According to latest figures released by CoreLogic earlier today, prices in Australia’s largest and most expensive housing market increased by a further 0.3% last week, leaving the gain so far in 2017 — less than three months old — at 5.3%.

Those in Melbourne rose by a smaller 0.1% for the week, although they too have risen by 4.4% so far this year.

Year-to-date, they’ve increased by 1.8% in Adelaide and 0.3% in Brisbane. Despite signs of a recovery in mining-related industries, those in Perth have fallen by a modest 1.1%. 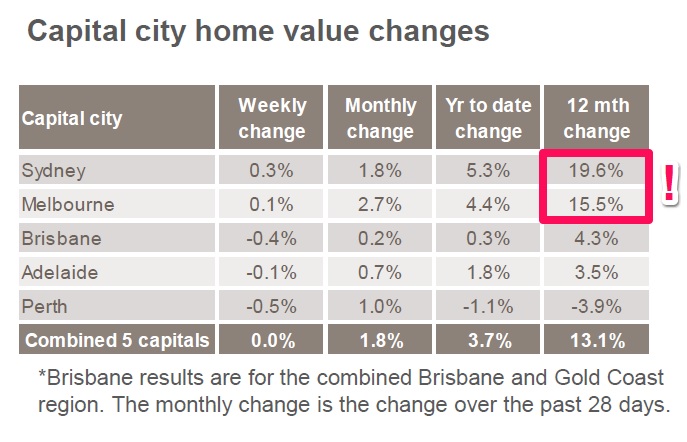 Looking at the table above from CoreLogic, it’s the gain in city-specific prices over the past 12 months that clearly demonstrates Australia’s multi-speed housing market at present.

At 4.3%, those in Brisbane come in at a distant third place.

The 13.1% national growth figure entirely reflects the size, and growth, of Sydney and Melbourne prices.

The strength in house price growth in Sydney and Melbourne corresponds with those two cities consistently recording the highest auction clearance rates of all Australian capitals, coming in at around 80% again last week according to preliminary data released by CoreLogic.

An increase in new properties up for sale has also done little to curb price pressures.

New listings in Australia’s other mainland state capitals all declined from the same period in 2016.

The continued gains in Sydney and Melbourne house prices also corresponds with new research from Credit Suisse that revealed foreign investors are currently buying property in New South Wales and Victoria at an annualised pace of $8 billion per annum, equating to 25% and 16% of new housing supply in both states over the past 12 months.

This article was originally published by DAVID SCUTT on the 27 March 2017 via businessinsider.com.au