This article was originally published by Michael Bleby on Mar 20 2018 via afr.com.au

The figures are preliminary, and likely to be revised higher as more home settlement data is recorded for transactions sealed during the quarter, but official figures showing lower transaction numbers and weaker dwelling price growth laid bare the growing risk for state governments that have become accustomed to strong stamp duty revenues in the now-ending booming housing market.

"The slowdown in price growth and reduction in the amount of transaction volumes places states like NSW and Victoria in a difficult position when it comes to their revenues," said Housing Industry Association senior economist Shane Garrett. "Stamp duty is something they depend on a lot and they're now at risk of seeing a reduction in stamp duty revenues."

Transfers of established houses in the NSW capital slipped to 46,361 last calendar year, down from 50,383 in 2016 and the weakest number since 2012, when they totalled 44,298, the preliminary Australian Bureau of Statistics figures on Tuesday showed. 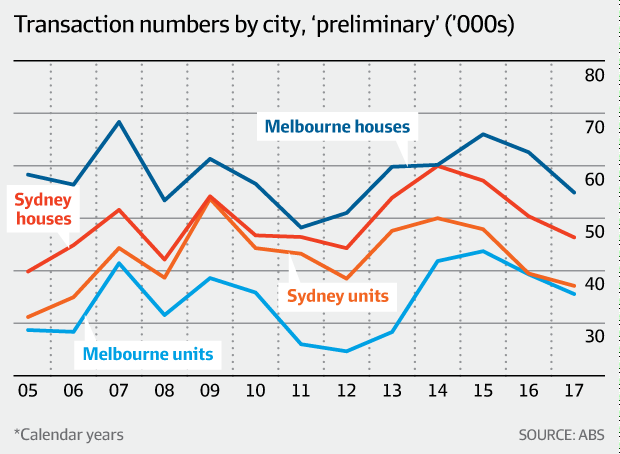 The drop in attached dwellings – apartments, townhouses and semi-detached homes – was even greater, with the annual total dropping to 37,129, the lowest since 2006, when it was 34,970.

While the figures show the effect of tighter credit rules for investors particularly in the Australian state with the highest proportion – about 40 per cent –of investor buyers, it also indicated the effect of soaring prices that have encouraged people to renovate and stay where they are rather than move house, and also some displacement as buyers opted for newly built homes over established ones.

Home transactions also slowed in Melbourne, where investors make up a smaller proportion of total sales, although the decline was less dramatic. Established house transfers fell to 46,361, also a five-year low, while attached-dwelling transfers slowed to 35,569, their lowest since 2013.

"It underlines the unreliability of stamp duty as a source of state government revenue and it re-emphasises the importance of states generating revenue from other sources outside of stamp duty, if they want to keep their finances on a sustainable path," Mr Garrett said.

Separately, the figures showed the average price growth slowed across Australia's eight capital cities in the December quarter, to 5.6 per cent for houses from 9.3 per cent in the same quarter a year earlier. Attached dwelling prices also slowed, to 3.4 per cent from 5.1 per cent a year earlier for apartments. Both were pulled lower by the Sydney slowdown.

"It's going to be slow and it could be painful and the question is will it be a hard landing or a soft landing but it's going to be a landing," Mr Costello said.