This article was originally published by DAVID SCUTT  on FEB 14, 2018 via businessinsider.com.au

According to latest HIA-CoreLogic Residential Land Report, the median vacant residential lot price surged by 6.5% in the September quarter of last year, hitting $267,368, up 10.9% on a year earlier.

Median prices in capital cities jumped by 7.8% during the quarter, far outpacing growth of 2.7% in regional areas. 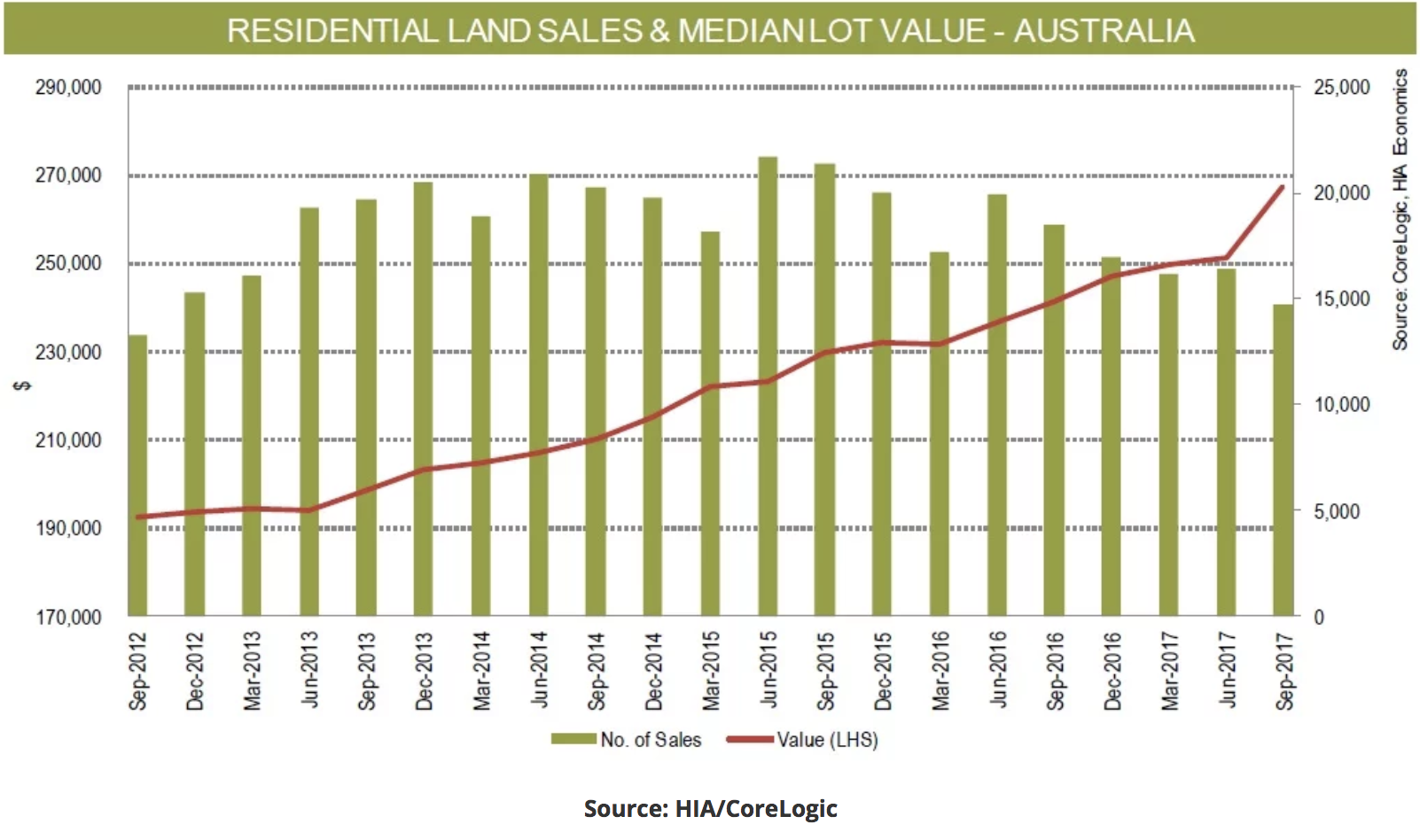 “Record population growth in Australia over the past decade has been accompanied by an economy with remarkably low and stable mortgage rates and demand for housing has grown very substantially as a result,” the report said.

“The ability of new home building activity to respond to this increased demand has been held back by insufficient supply of shovel-ready residential land.”

This, according to Australia’s Housing Industry Association (HIA), is only making the task of solving Australia’s housing affordability crisis worse.

“The housing industry’s ability to ramp up the supply of new dwellings as demand dictates is hampered by the inconsistency of the land supply pipeline. The time it takes for land to be made available to builders is unnecessarily long.”

“The 6.5% acceleration in vacant residential land prices suggests strong demand, even in the context of our largest residential markets passing peak growth rates for the current cycle,” she says.

“The CoreLogic Hedonic Home value index is showing a 1% quarterly decline in capital city dwellings in the three months to January, led by the Sydney market which saw a 2.5% decline.

“Despite the softening in capital growth, land prices were driven higher by long term confidence in some Australian metropolitan markets.”

Along with strong demand, another major factor behind the increase was a sharp drop in supply with turnover falling to levels not seen in five years.

“Our preliminary estimate suggests that the vacant residential lot sales volume dropped by 10.3% during the quarter and 20.4% from a year earlier.

That largely reflected a quarterly decline of 10.9% in Australia’s capital cities, leaving the drop on a year earlier at 20.9%. 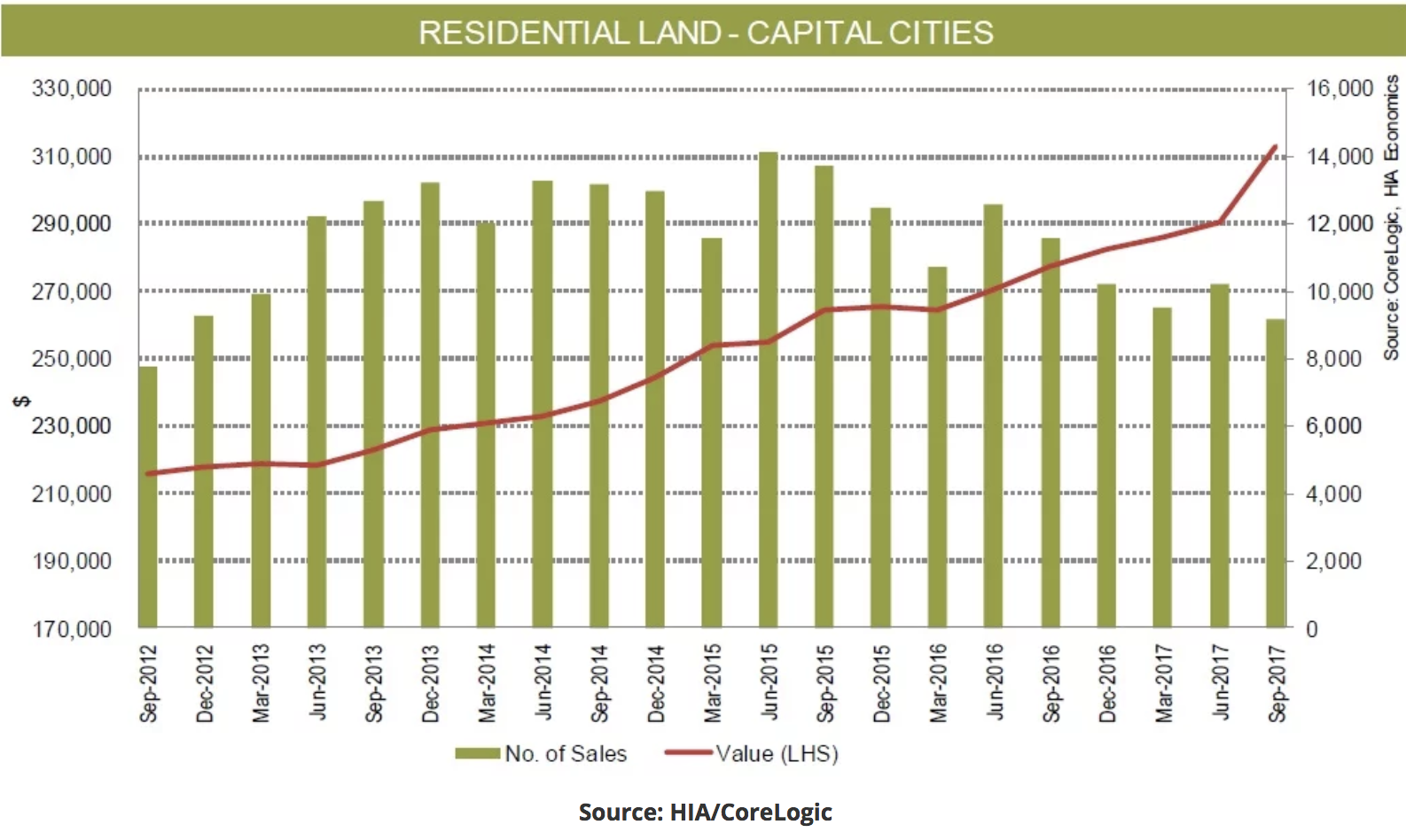 “Melbourne is Australia’s most active residential land market with preliminary figures indicating that 3,201 lots were transacted during the quarter, equivalent to over one in five (23%) of the national total,” the report said. 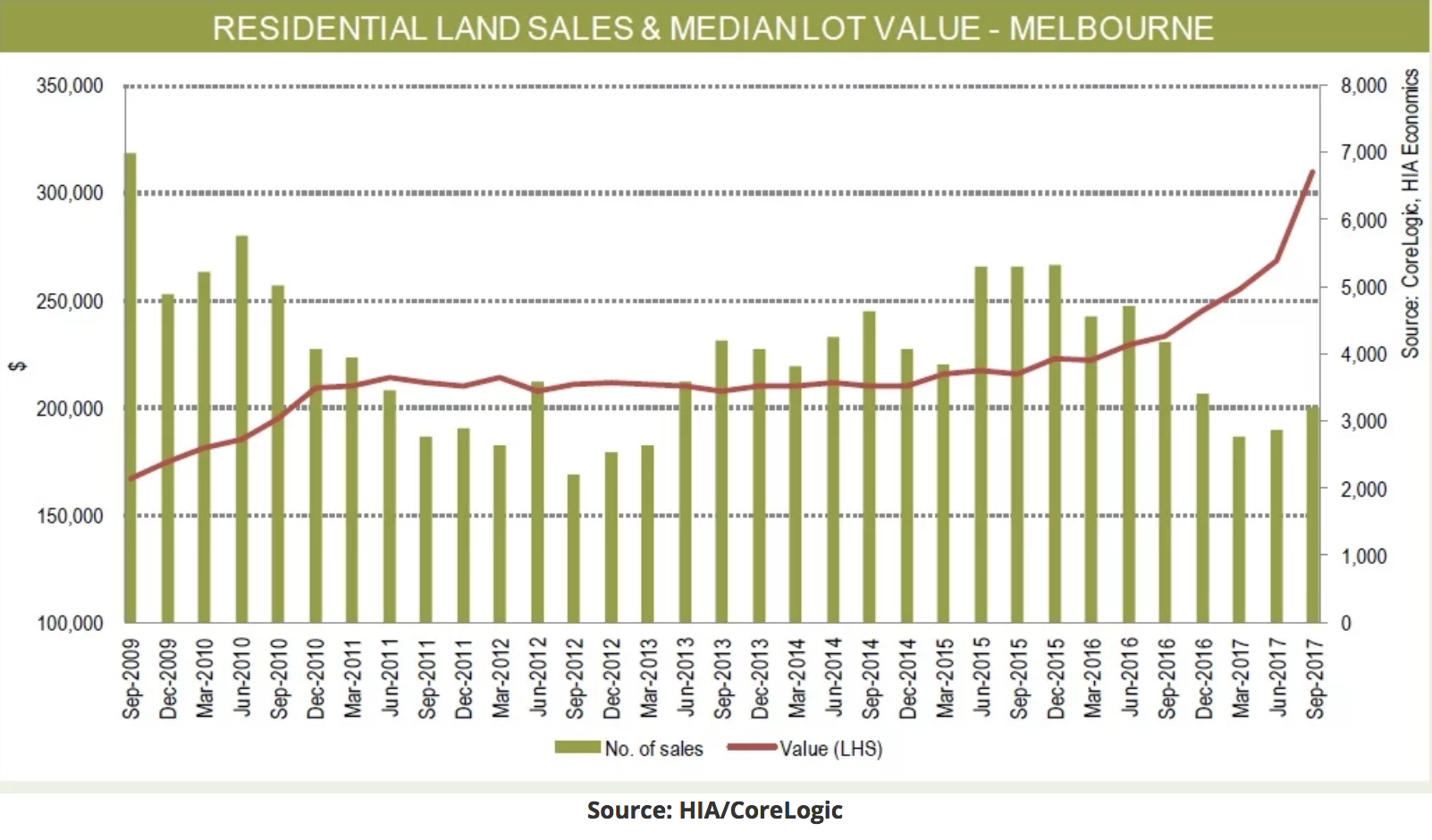 “During the same period, Brisbane was the second most active residential land market with 1,928 lots sold accounting for 13% of the national total, followed by Perth in third place with 1,829 transactions, or 12% of the total.

“Although Sydney has the highest volume of building activity it is only the fourth largest residential land market at 8% of the total.” 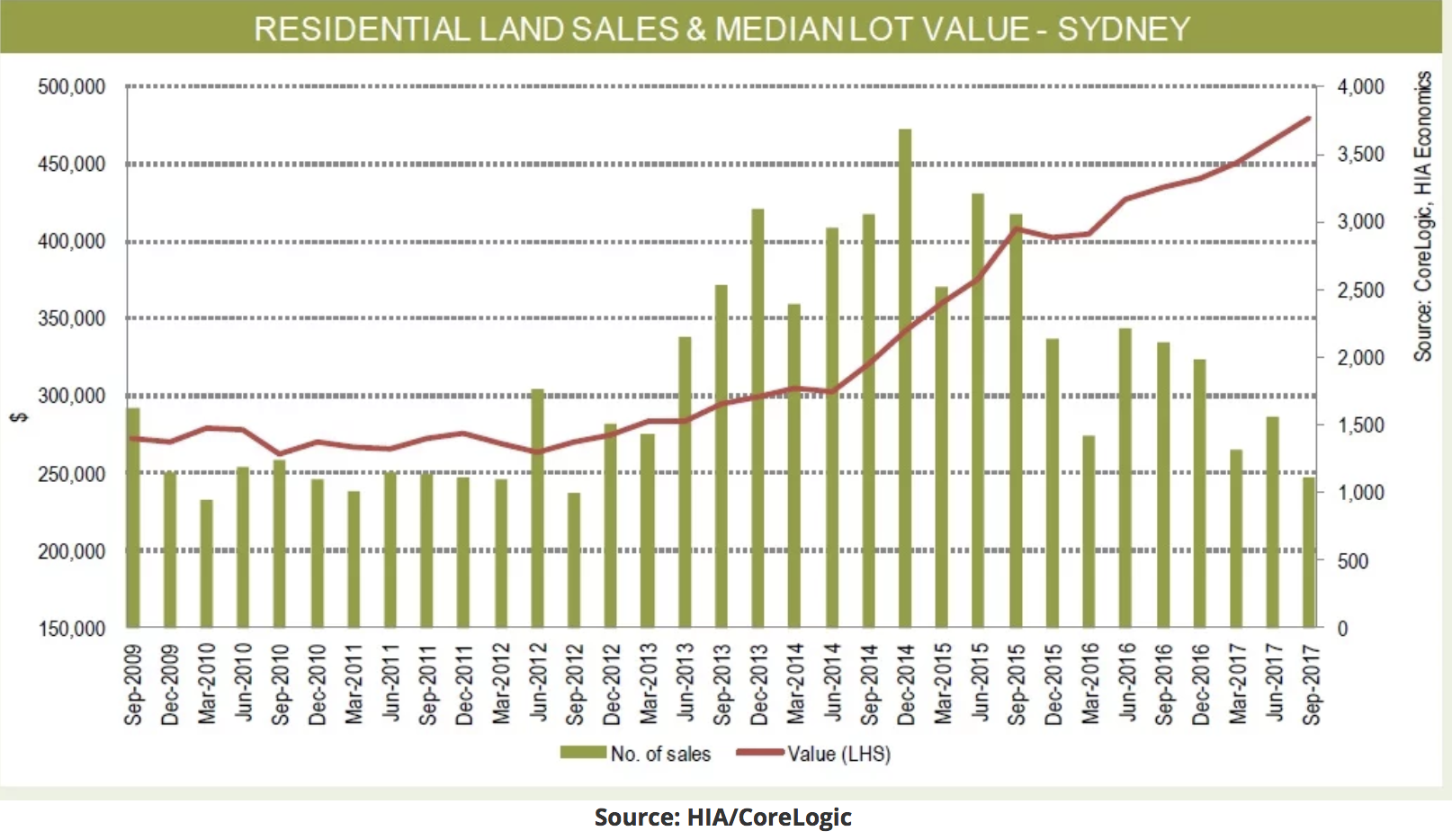 With demand strong and supply far smaller than levels seen in recent years, median lot prices rose dramatically in Melbourne and Sydney over the year, lifting by 33% and 10.3% respectively.

These are Australia’s fastest growing capitals in terms of population increase, according to latest data released by the ABS. They’re also home to the highest median house prices in the country.

This table from the report shows the movement in median lot prices over the past five years. 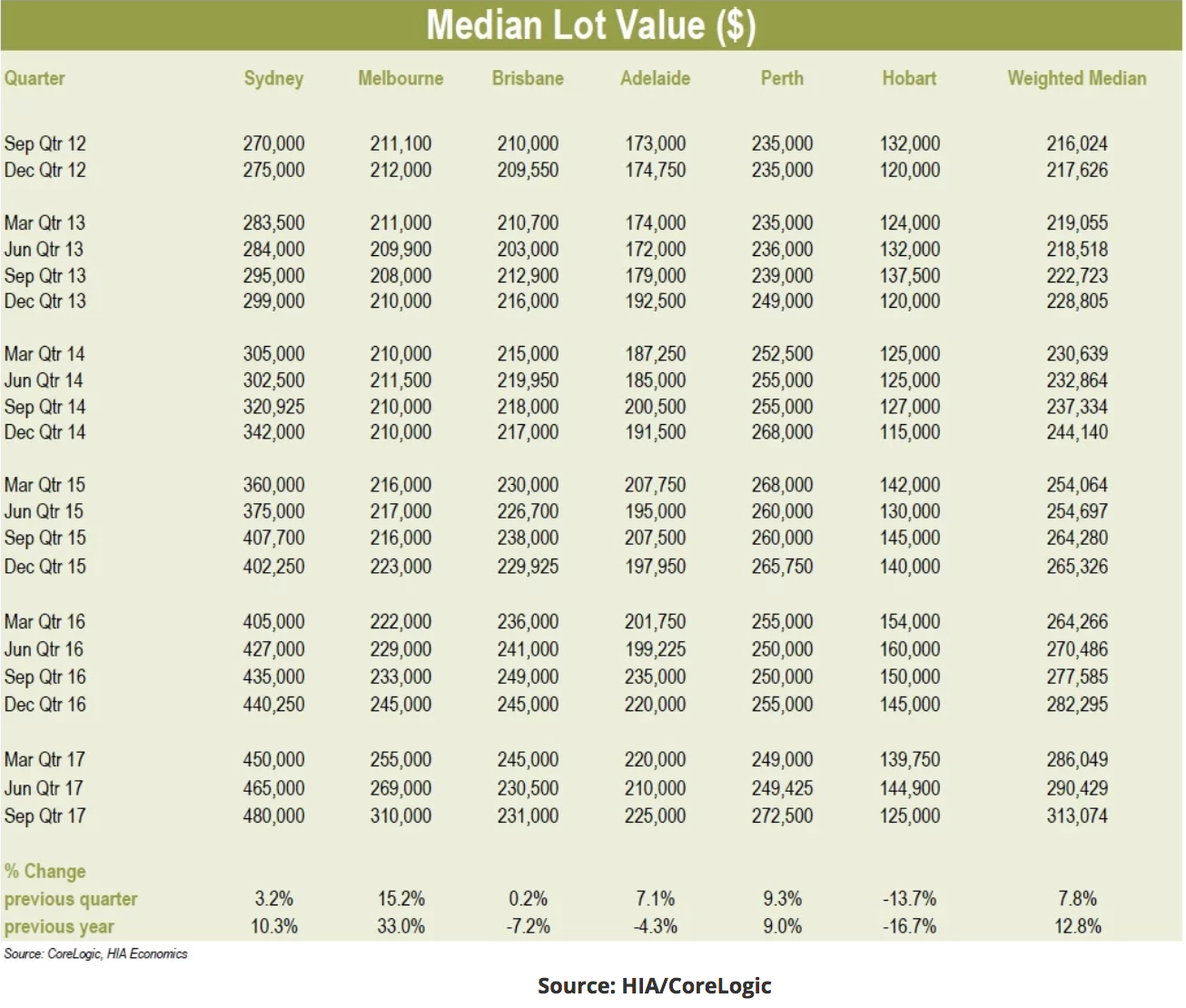 Excluding the impact of different lot sizes on offer, the median price per square meter jumped by $48 in Melbourne, $44 in Perth and $28 in Adelaide over the quarter.

Prices in Hobart, Sydney and Brisbane went in the other direction, falling $27, $11 and $1 per meter respectively. 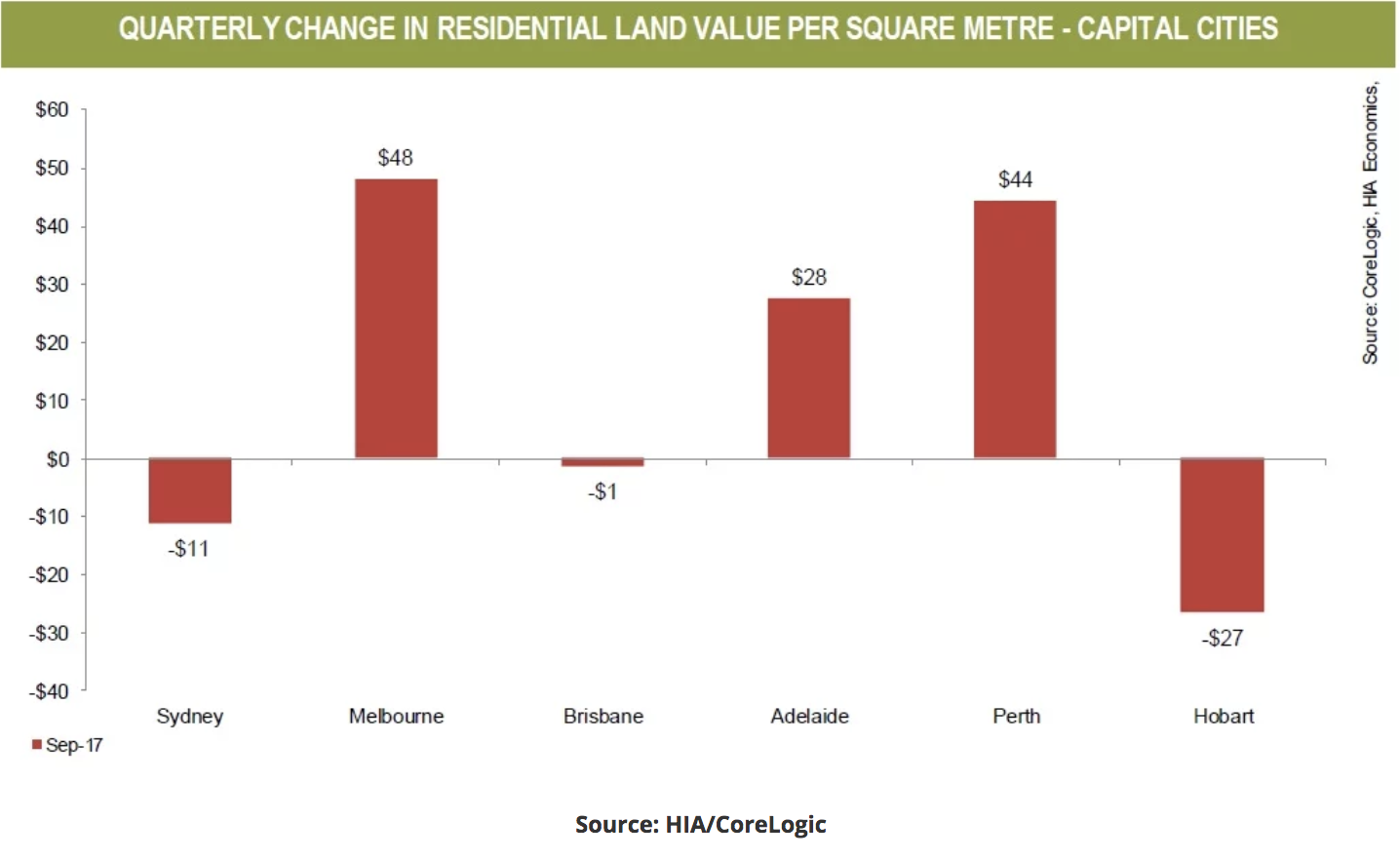 Longer term, as seen in this next chart from the report, prices per square meter have skyrocketed over the past decade in Australia’s southeastern corner, tripling in Melbourne and doubling in Sydney, Brisbane and Adelaide. 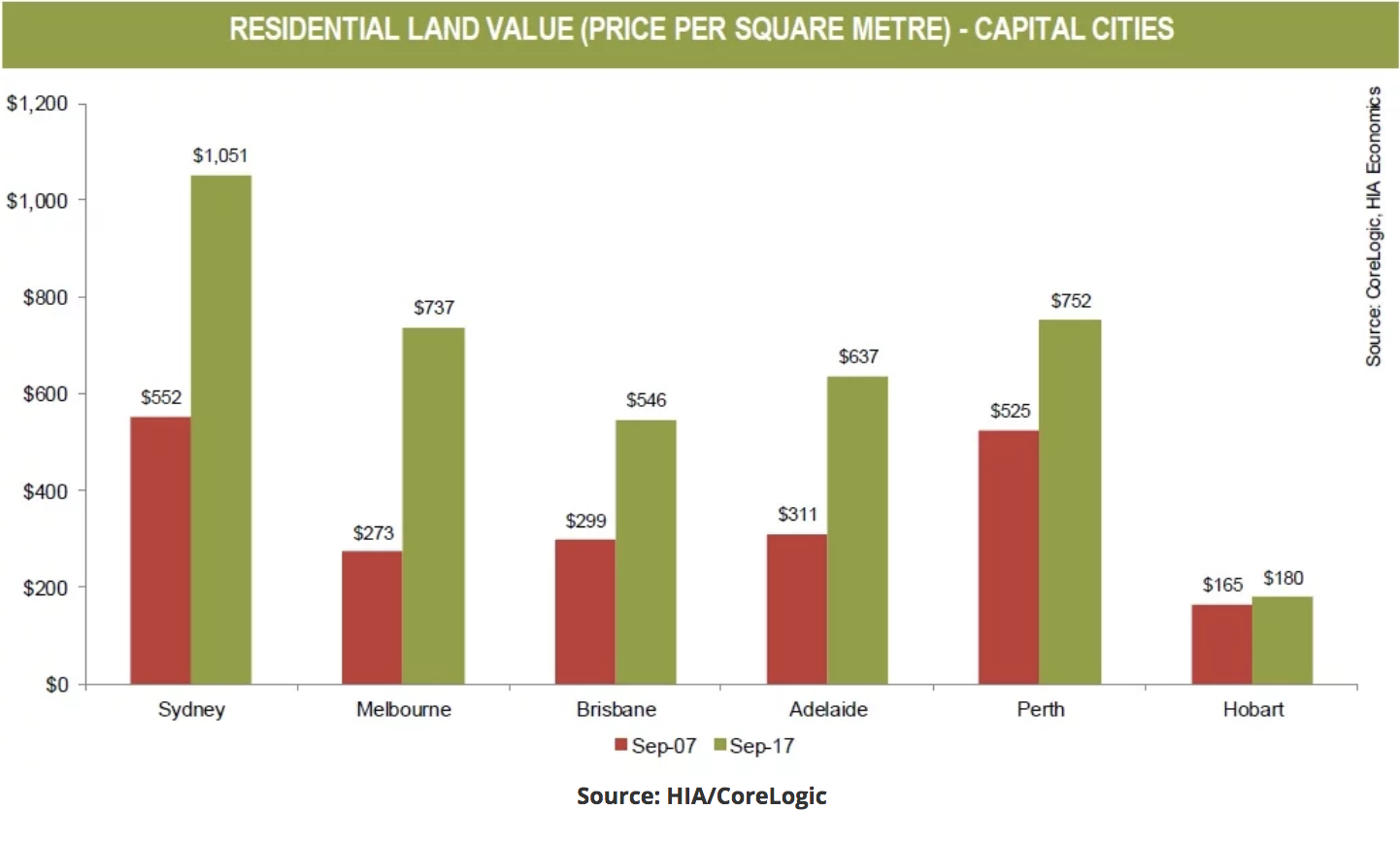