'They’ve lost the lot': how the Australian mining boom blew up in property owners' faces

The calls to financial counsellors began about 18 months ago. Middle-aged, middle-class homeowners in Western Australia who had shifted their retirement nest egg from superannuation to property were suddenly unable to pay their mortgage.

It typically started with an investment property, often in the Pilbara mining towns of Karratha, Port Hedland and Newman. Purchased for $750,000 in 2012, when the market was near its peak, the property was now worth $300,000 and falling. The rental return, which had been $1,600 a week, had fallen to $370. Not enough to cover repayments.

Then came the kicker: the massive mining projects whose construction had fuelled the biggest economic boom WA had ever seen were now completed and required considerably fewer employees. The mining industry shed 46,000 full-time jobs between 2013 and 2015, and those who were able to find new employment were no longer commanding boom-time salaries.

Unable to keep up with repayments for either their investment property or their family home, and unable to sell either for a price that would cover their debts, they now faced losing both to the bank.

Nanette Williams, the chief executive of Pilbara Community Legal Service and an accredited financial counsellor, hears this story at least once a week.

In the past 12 months, she and her team have become adept at negotiating with the banks, which she said had been “very understanding” of clients facing financial ruin.

“These people move into a rental property then, which often costs them far less than the mortgage repayments. In one case, the client had three properties and the one they were living in, and they lost all four. There was still a deficit after all four were sold and the bank waived that deficit.”

Williams has worked in Karratha for 32 years. The job and housing market has always fluctuated on the whim of the resources sector but it had never before risen so sharply nor fallen so hard.

If property owners didn’t get out before the bubble burst, the president of the Real Estate Institute of Western Australia, Hayden Groves, said, “they almost can’t give it away”.

“The sad outcome really is for local people in those regions ... family businesses with mining-related enterprises going on but with severe capacity constraint because the work was there but, in order to fill the gap, they often would have to buy land, build homes, in order to just house their workers. 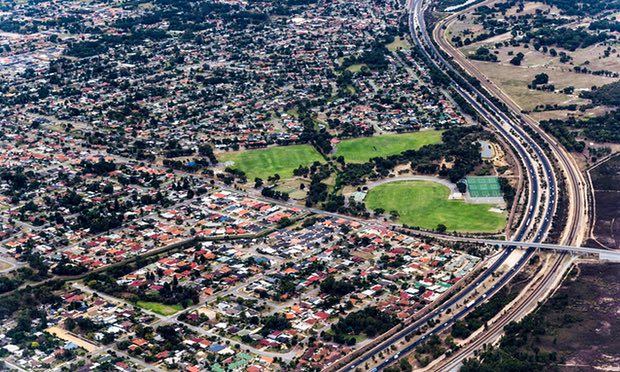 “The speculators who take a punt on making a mint and if they don’t see it coming don’t get out, well, I think they’ve only got themselves to blame.”

It’s an example of what could happen when the market collapsed, Groves said, but he said those anticipating a similar collapse in the overextended Sydney and Melbourne housing markets would be proved wrong.

Both cities have a strong net migration and strong demand independent of any one industry and, unlike Perth, Groves said, they’re “big markets to turn around”.

He said the decrease in Perth’s property prices was moderated by a “surprisingly resilient” market in mid-range suburbs but both the top and the bottom of the market were struggling.

Homes bought for $6m in the blue-chip inner west suburb of Dalkeith are now selling for $3m and properties in the outer eastern suburbs, traditionally known as Perth’s mortgage belt, are not selling for their asking price.

The Midland Information Debt and Legal Advocacy Service is located in the middle of that mortgage belt. It has been “inundated” in the past 12 months by people made redundant in the mining downturn who can’t make their repayments, its general manager, Justine Clarke, said.

A number of those people also have an investment property, intended to fund their retirement, secured against their family home.

They now face retirement with nothing, Clarke said; a choice between holding out for the job or recovery in the housing market that might never come, or minimising further damage by declaring bankruptcy.

One client was already retired and living frugally off the pension, living in a home that she owned outright. She was encouraged to borrow against her house to purchase several investment properties in a mining town during the boom, Clarke said, and had lost them one by one before losing her home.

Mitchell said the service had seen a spike in calls from people in mortgage distress in the past 12 months, typically from men in their 40s or 50s who were employed at a high wage in the resources sector.

“It’s people that have not been in mortgage arrears or financial distress in their life and are experiencing it for the first time,” she said. “So it’s quite stressful for them. Normally by the time people are calling us for advice, they are quite stretched and desperate or they have exhausted all their options in regard to the banks. Or they have just buried their heads in the sand and just not dealt with the issue at all.”

There have been 2,052 civil property possession applications before the supreme court in WA since July 2015, more than in the previous two years. The majority of the applications were from banks calling in the mortgage.

There has been a 14% increase in calls to the national debt helpline in the first three months of 2017 and and a third of those calls relate to mortgage stress.

The hotline is manned by the Financial Counsellors’ Association of WA.

“People have got themselves into a financial situation that’s just become untenable,” executive officer Bev Jowle said. “Not being able to work with those higher wages any more, the increase in utilities bills ... All of these things seem to be converging for people now and they are really under a lot of stress at the moment.”

Richard Naulls, a real estate agent based in Karratha, said he expected the Pilbara market to level out in the next 12 months, and may increase by 20% by 2019, but it is unlikely to return to 2012 levels.

For those already forced to surrender to the banks, Naulls’s prediction will offer little comfort.

This article was originally published by Calla Wahlquist on the 12 May 2017 via theguardian.com