Before I go into what I believe are the best investment opportunities in 2013, permit me to take a moment to reflect on 2013, an interesting year, during which we were told the world was supposed to end several times, not to mention our economy and property market crash.

Lets rewind the clock back to 2008 and reflect a little on the Global Financial Crisis, (GFC), which came and went, and all the media in Australia, including academic, so called ‘experts’ who made extensive predictions that Australia was heading towards a “property bloodbath” as the global economic downturn spread, with a decline in property prices of 60 per cent (Jordan Wirsz) or worse. This extreme Armageddon-like Australian property outlook portrayed by the likes of Harry Dent, Dr Steven Keen and Jordan Wirsz, were, over time, all proved wrong.

In fact, not much happened around the major capital cities; have a look at the Melbourne property market as an example below; 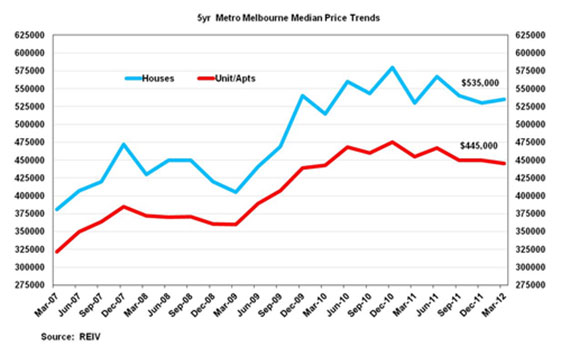 Conversely, these extreme views have been largely slammed by Australian property experts, leading economists, and property research based companies including, but not limited to, Residex, RP Data, AMP, ANZ, HIA, BIS Shrapnel, HSBC leading economist -Paul Bloxham, and the list goes on. To put this statement into context, a 60 per cent decline in property prices across Australia would translate to, Sydney’s house prices dropping from $660,000 to $264,000, Melbourne’s house prices dropping from $550,000 to $220,000, and Brisbane’s house dropping from $580,000 to $232,000. It’s laughable, isn’t it?

Did I mention that this proposed ‘market crash’ is supposed to take place in an Australian economic environment which includes low unemployment rates, historically low interest rates, a strong Australian dollar riding on the back of a resource and commodities boom industry, not to mention a massive surge in incoming migration, most of whom will settle in the major capital cities, with a back drop of a decline in housing construction and shortage of dwellings of approximately 160,000 by 2021?

So once again, the ‘Doom Seers’ retreated back into the dark cubicles,  libraries, or university research departments, collecting new documents and data, preparing for a new opportunity to herald their next Apocalyptic prophecies.

It didn’t, and despite the Australian property market being relatively flat in 2012, due to most capital cities being located in the bottom of the property cycle, no crashes were in sight.

So once again the ‘Doom Seers’ retreated and waited for another opportunity, patiently awaiting their opportunity to prophesize the Apocalypse once again, but this time for real!

Before long, they siezed their next Apocalyptic opportunity, the reduced Growth in the Chinese Economy. By end of 2012, the last quarterly Chinese economic figures showed that China’s growth, which has been recording double digits for years, slowed down to a decade-low 7.5%, as a result of weak export markets and Beijing’s efforts to curb surging prices, which have succeeded in reducing inflation and stabilizing property prices. At the end of the day, it is completely unsustainable to have growth at double digits for decades on end without inflation going out of control. This slowdown in the economic growth of China coincided with a drop in iron ore prices to record low levels in the months of August and September 2012 where iron ore slumped to below $US87 a tonne in world markets.

This was the opportunity that the ‘Doom Seers’ were waiting for, making a quick link between China’s economic slowdown and slump in iron ore prices signifying the ‘End of the Mining Boom in Australia’, followed by high unemployment, and you guessed it….a property market crash!

Unfortunately for them, their prophesies were short lived when in January 2013 the Organization for Economic Cooperation and Development (OECD) stated that the economy would bounce back to grow 8.5% next year and 8.9% in 2014 as domestic demand gathers pace and spending on housing and infrastructure revives, the report predicted. That is more bullish than the International Monetary Fund, which forecasts 2013 China growth of 8.2% and 8.5% in 2014. To add salt to their wounds, iron ore prices jumped back to $US157 a tonne, as China ran out of iron stock pile. And, no property crash in sight.

The point of all this?

The Australian economy it seems, is extremely stubborn in succumbing to the mystical ‘Property Bubble’, with mortgage arrears percentages being negligible, household debt stabilizing, savings increasing, and relatively low unemployment numbers; it suggests the housing market represents a modest threat to the economy.

The head of the country’s central bank certainly wonders what all the fuss is about.

Interestingly enough, in a recent interview by AFR editor-in-chief Michael Stutchbury and economics editor Alan Mitchell with the Reserve Bank Governor Glenn Stevens, showed that Glenn Stevens does not think Australian house prices are unreasonably high and does not believe they will drop. Nor does he agree that we have a price bubble.

I tend to agree with him.

According to ABS studies around 1 million houses in Australia are owned by private landlords, but how many of these can be classified as ‘real’ property investors?

Personally, I classify one a true property investor if they have 4 properties or more, especially those who have 5 plus as this would need to involve a considerable amount of knowledge and time investment.

Here is my question to you…

Where do you sit in this ranking?

And more importantly, where do you want to be located on this ranking in the next 5 years?

My final question to you is what specific action steps are you going to take and implement in 2013 in order to make this happen?

HERE ARE MY TOP 3 INVESTMENT PROPERTY LOCATIONS FOR 2013.

Bendigo has long been one of Victoria’s key regional centres, with solid growth thanks to its steady local economy, proximity to Melbourne and good transport links to the capital. Bendigo is 130km north-west of Melbourne. It is accessible from Melbourne via the Calder Freeway and the Bendigo railway line, both of which have been recently upgraded. Bendigo is an 80-minute commute to Melbourne’s CBD via the V-Line Regional Fast Train, following a rail upgrade completed in 2006.

Bendigo has been experiencing what seems to be an ever-growing population problem, which has created a perfect storm for savvy investors who are taking advantage of capital growth rates of 11 per cent over the last 10 years, vacancy rates of 0.2 to 0.4 per cent, and 5 to 6 per cent rental yields!

Did I mention that the median price is $285,000, and not to mention a population growth of up to 4.5 per cent per year in areas such as Huntley?  All in all, it’s an area that has an diversified industry, balanced between manufacturing, Health Care and a number of white collar industries, and is growing organically, well above Melbourne and other regional areas around Australia.

See the capital growth history of the Bendigo area below;

Furthermore,regional areas have outperformed capital cities in the year to March, according to the ANZ, with Bendigo coming in as the fastest regional growth area in Victoria. 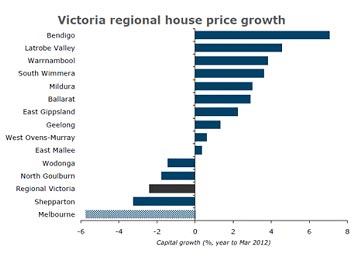 If Melbourne is “The World’s Most Livable City”, then St.Kilda is without doubt a premiere investment ‘hot spot’ on a global scale. St. Kilda is one of Melbourne’s top high-in-demand suburbs, with a young population, predominantly in the 25 to 34 year age group, leading a huge demand for rental property. With a blue chip and highly sought after inner city location, the suburb sits within 6 km of the CBD, in an area that is recognized as Melbourne’s most iconic cosmopolitan attraction, surrounded by parks and gardens, cafés, restaurants and an endless array of retail destinations, including designer Chapel Street, eclectic Greville Street and trendy Acland Street.

Located on the beach, the area boasts a rich history spanning well over 150 years, with a great array of amenities and infrastructure located in the suburb, and nearby. Transport including rail, train lines, and buses, makes St. Kilda one of the most accessible suburbs in Melbourne from the CBD, and the destination of choice for tourists and locals alike. A colorful, artistic, and rich heritage area, St. Kilda consists of a mixture of properties from cutting-edge, modern design apartments to Italianate-Victorian multi-million dollar mansions. 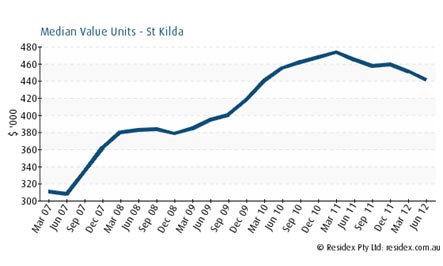 With such outstanding growth, we are excited to have access to an extraordinary new development which is sure to become a Melbourne icon in this most desirable location.

This brand new boutique 4 level development consists of 27 one and two bedroom apartments which have been designed to maximize space and light, complete with heating and air conditioning, security and car parking.

At a starting price point of $350,000 for a one bedroom apartment, to $750,000 for a two bedroom penthouse with city views, over 21 apartments have already been snapped up with only 6 apartments remaining!

This development will not last, so jump on the phones now and request a full Property Investor Analysis (PIA) Report from one of our senior consultants which details the exact out of pocket weekly investment that you will need in order to secure one of these properties.

Remember that many of our clients have secured a property in this development which is only costing them around $50 per week out of pocket. 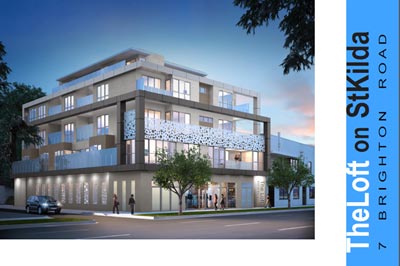 China’s continued unprecedented growth will create a strong demand for our commodities for decades. Have a look at these staggering growth projections for China:

This has resulted in over $500 Billion Dollars invested in mining projects throughout Australia.

At present, accommodation is so tight that local employees are shifting away from detached rental houses (due to its short supply) and into older apartments or even construction camps. Many are buying now instead of renting. The average Gladstone resident earns 50% more than the typical Australian.

Gladstone’s population is predicted to increase between 10,000 and 25,000 in the next five years. The wide range depends on the scale of future industrial development. Independent modelling by central Queensland University suggests that Gladstone’s median house prices could rise from today’s $480, 000 to between $600, 000 and $925,000 by 2018.

Here are some quick facts about Gladstone;

6. Looking forward, given the expected lift in population growth based around Gladstone’s growing economy, there is a need to build about 900 new dwellings each year in the area.

7. Over the past seven years, the underlying demand was for around 800 new housing starts each year. Yet over the same time period, just 600 new dwellings were supplied on an annual basis.

10. Despite claims to the contrary, there isn’t enough new urban development coming through Gladstone’s construction pipelines.

14. Last year alone, 5,600 new jobs were created across central Queensland, about a third of which were located in and around Gladstone

16. There are just 87 properties – as at late August 2012 – available for permanent rental in the Gladstone area. This equates to a 1.3% vacancy rate. Yes, the vacancy rate had lifted from 0.3% this time last year, but keep in mind that most vacant properties in Gladstone take under two weeks to rent and on average five applicants apply per listing. There were 128 properties vacant in July this year, so properties lease quickly in the area

17. Gross rental returns remain very favourable for investors with independent advice suggesting that Rivergum Gladstone house and land product should attract gross rental yields between 6.8% and 7.3%. this compares extremely well with the mid-4% range for many rental properties in the south-east corner of Queensland

18. The billions being invested will create over 9,000 new permanent jobs and thousands of contract workers. 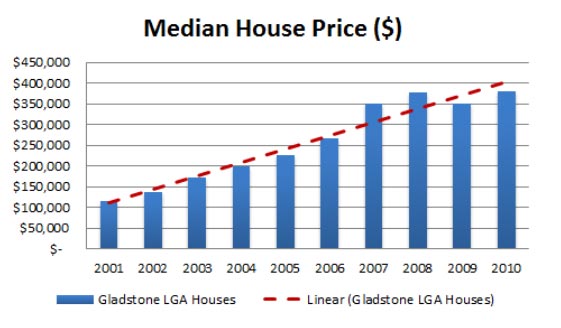 The key to building your wealth in the shortest possible time frame is to appreciate one key fundamental principle of finance which is understanding the Debt Serviceability Ratios (DSR) used by banks and financial institutions, and how they assess and work out how much money you can borrow.

Ultimately, the key is to acquire a combination of Growth Properties which are negatively geared and Cash-Flow Positive properties in order to fast track your accumulation process.

That’s almost it from me for now, but I wish you all great prosperity for 2013 and encourage you to seize all the opportunities before you this year, that will ultimately bring you financial freedom.

To your exciting future…