This following article was originally published by Michael Pascoe on JANUARY 15 2018 via smh.com.au

Multibillionaire Meriton tsar Harry Triguboff has picked up this year where he left off last year, and the year before – decrying any and all moves to tighten up on foreign investors buying the apartments he churns out.

Harry talking his own book, who'd have thought it?

The interesting thing about Triguboff's recent warnings in The Australian Financial Review is that the story contains good reasons to think the much-headlined cooling of the housing price boom will be mild.

"Government taxes and credit restrictions have started to hit foreign buyer demand for residential property so hard in Australia that major developers are either pulling out of the apartment market altogether or, like Meriton's Harry Triguboff, are left grappling with Chinese investors who can't settle on pre-sold apartments," it says. 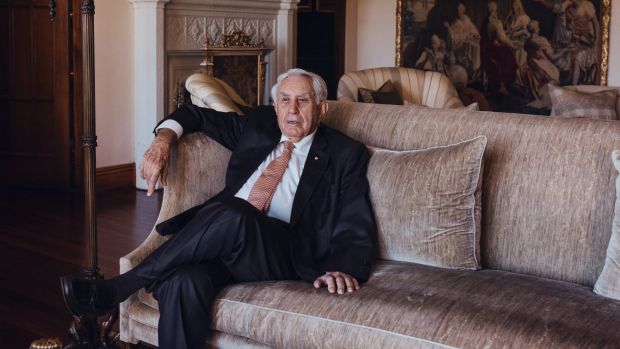 With an estimated wealth of $11.4 billion, I suspect Triguboff will be fine. Photo: James Brickwood

Building approvals actually peaked back in 2016. An odd surge in Footscray high-rise approvals distorted the November figures, but the completely expected pullback from unsustainable growth is in place. And not all approvals will turn into commencements.

That's the reassuring thing about the latest instalment in the multi-year saga of scary housing-related headlines.

Developers responding to reduced demand by reducing new supply means less chance of a fat overhang seriously damaging the market. Past property busts had developers going full tilt up to and over the edge.

Pulling back now means even the oversupplied markets, such as Brisbane high-rise units, could have space to clear in time given the increasingly strong domestic demand fundamentals of employment and population growth. 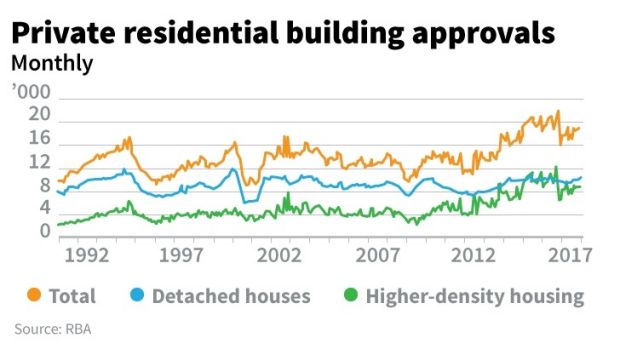 A series of graphs by property analyst Peter Wargent neatly summarises how strong this week's job vacancy figures were, including good growth in the often-maligned manufacturing and mining industries.

On the evidence, Wargent dares suggest Sydney could see record low unemployment in 18 months or so. 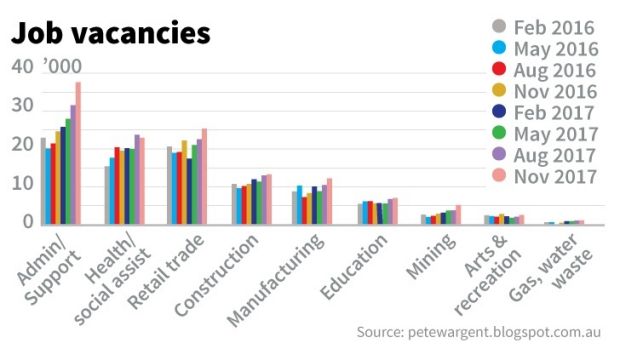 Not that there aren't/won't be pockets of actual house price stress, as opposed to exaggerated and highly subjective "mortgage stress" figures so loved by the doom-and-gloomers. (You know the "if rates rise 25 points we'll be ruined" stories? Most people could save more than that by comparison shopping.)

But back to Triguboff. In April 2016, he was slamming the NSW government for increasing stamp duty for foreign buyers, saying Chinese buyers were disappearing.

That was when he wasn't bagging local councils for stopping him building more apartments and criticising the Reserve Bank and Australian Prudential Regulation Authority for tightening up on local banks' lending to foreign buyers.

By the end of the year, all was again well with Meriton's outlook, aside from "idiots" on councils not approving his projects quickly enough.

Five months later, Triguboff said apartment prices were weakening and he would finance about $200 million of the $1.4 billion of apartment sales he expected to make in 2017 thanks to local banks' policies and Beijing's crackdown on money leaving the country.

In July, there was another slowdown after another NSW stamp duty hike but Triguboff said demand was slowly shifting to local buyers.

But now it seems Meriton has problems with some of those hot-off-the-plane-and-plan buyers.

"Many of the Chinese can't settle," he said in the AFR earlier this month.

"So now we have to resell them – there is another problem. And everyone thought that the Australian buyer would come in when the prices started coming down – they haven't – I knew they wouldn't – it wouldn't make any sense if they did."

With an estimated wealth of $11.4 billion, I suspect Triguboff will be fine, and Meriton more than capable of riding the market's ructions.

For a correction of some parts of the market to turn into a housing crash, the usual requirements are one or more of a sharp rise in unemployment, a sharp rise in interest rates or a fall in population.

The multi-year housing bears continue to be denied all three, but have seized on the idea of the "IO cliff" – the bunch of interest-only loans that the authorities are pressuring banks to turn into principle-and-interest to ensure the stability of the financial system.

That comes with a consequent jump in monthly repayments, mainly for speculators who have been betting on rapid capital growth continuing.

There was no better example of that than the recent story of a real estate marketing company's founder claiming the outfit's "20,000" customers couldn't afford their mortgage repayments when their banks switched them out of IO loans.

Kevin Young, founder of Queensland's Property Club (previously called The Investors Club) had said: "We're advising our members to get themselves into conflict with their bank, to say they can't afford principal and interest repayments without ending up in financial stress.

"Most of the time, the bank will acquiesce."

Through the usual seminars and such, Property Club markets property for developers to "members" with inhouse brokers and service providers helping with the details.

When property prices are soaring and property investment is touted as a sure way to wealth, well, a rising tide lifts all boats. When the price of marginal new properties doesn't rise and 20,000 customers have been encouraged to take IO loans during sales seminars, gee, what could go wrong?

Fortunately, for the broader market, it doesn't look as bleak as the local UBS office likes to paint it. With the banks now well under their IO ceiling and cheaper rates available by shopping around for P&I, the "cliff" is more likely to be a hill. But don't let that get in the way of a scary story.